Each year the awards’ categories of wine style or variety differs. The styles and varieties are already in place until 2025, allowing winemakers the opportunity to prepare, particularly red wines, for the awards. The awards are presented to the winemakers who produce a wine that the judging panel considers the best in the specified category.

Ten finalists were chosen through rigorous judging. Johan triumphed with the 2015 Simonsig Kaapse Vonkel Brut and Philip with the 2018 Glen Carlou Collection Tannat.. 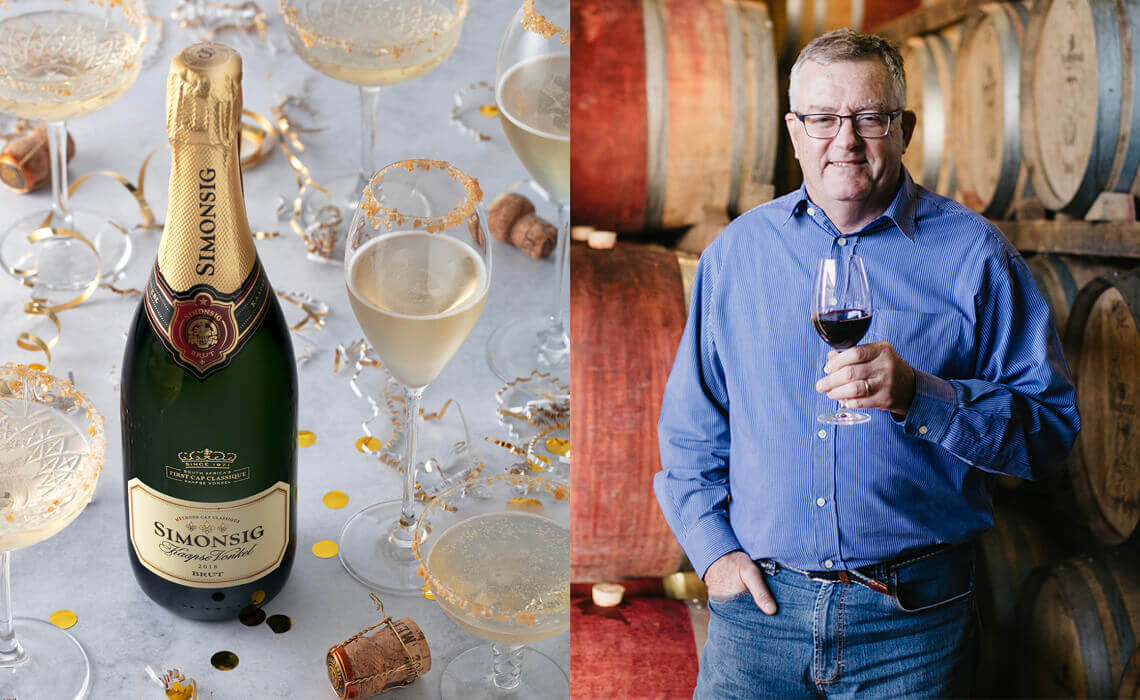 Johan Malan, Winemaker of the Year.

Winemaker of the Year

Johan says, “Dom Perignon said, ‘Come quickly, I am tasting the stars!’ I felt as though I was tasting the stars, and as it was my wife Diane and my wedding anniversary too. This award is full of meaning and symbolism for me and my team, all of whom played a part in this award. I am humbled and grateful.

“We spent many hours tasting the various vintages to select the best Kaapse Vonkels to enter. It was great to be a finalist. It was also special when I saw the other finalists who were all serious Cap Classique winemakers with long track records. I knew it would be tough!”

Johan’s father, Frans Malan, Stellenbosch wine pioneer, started experimenting with this style of wine using Chenin Blanc. In 1990 Johan Malan travelled to Champagne on a study tour. His travels inspired him to plant Pinot Meunier. In 1997 Simonsig Kaapse Vonkel became the first Cap Classique to include all three of the classic grape varieties, Chardonnay, Pinot Noir and Pinot Meunier. The first wine was named Kaapse Vonkel, now a legend. For many years Frans was the only winemaker to make bottle-fermented sparkling wine in the Cape.

“The DC Winemaker of the Year is the silver lining of this year’s dark cloud. The pandemic has forced me and Simonsig as a business to think out the box and find alternative ways to operate. It has been a tough year, but the resilience of people in the industry has been astounding.”

Johan says it is a huge honor to be in the company of previous Diners Club Winemaker of the Year winners. “Especially in its 40th year. It also happened at the perfect time for Simonsig Kaapse Vonkel. Next year we will celebrate the 50th anniversary of the first Kaapse Vonkel made in 1971.”

The 2015 vintage has been rated as one of the best South African vintages ever, but he says, most people will only think of 2015 South African red wines. “Vintage variation for Cap Classique is hard to identify early on, but we realized the 2015 has class. We grow most of the Chardonnay and Pinot noir on the estate, but I source grapes from selected regions outside Stellenbosch too, especially cooler areas like Elgin and Darling. This brings bright, intense fruit and it is important to have a wider selection cuvées to blend with.”

Johan has been at Simonsig for 38 vintages. Diane already asked him where they are going with the prize money. He is considering Argentina and Chile. “Both countries are making fantastic wines. It would also be very tempting to visit Machu Picchu in Peru.”

Johan says his father had a huge influence on him and not only relating to wine and winemaking. “He always looked for new ideas and did so many innovative things in the wine industry. I also had the privilege to work with talented winemakers at Simonsig and picked up many new ideas from them.” 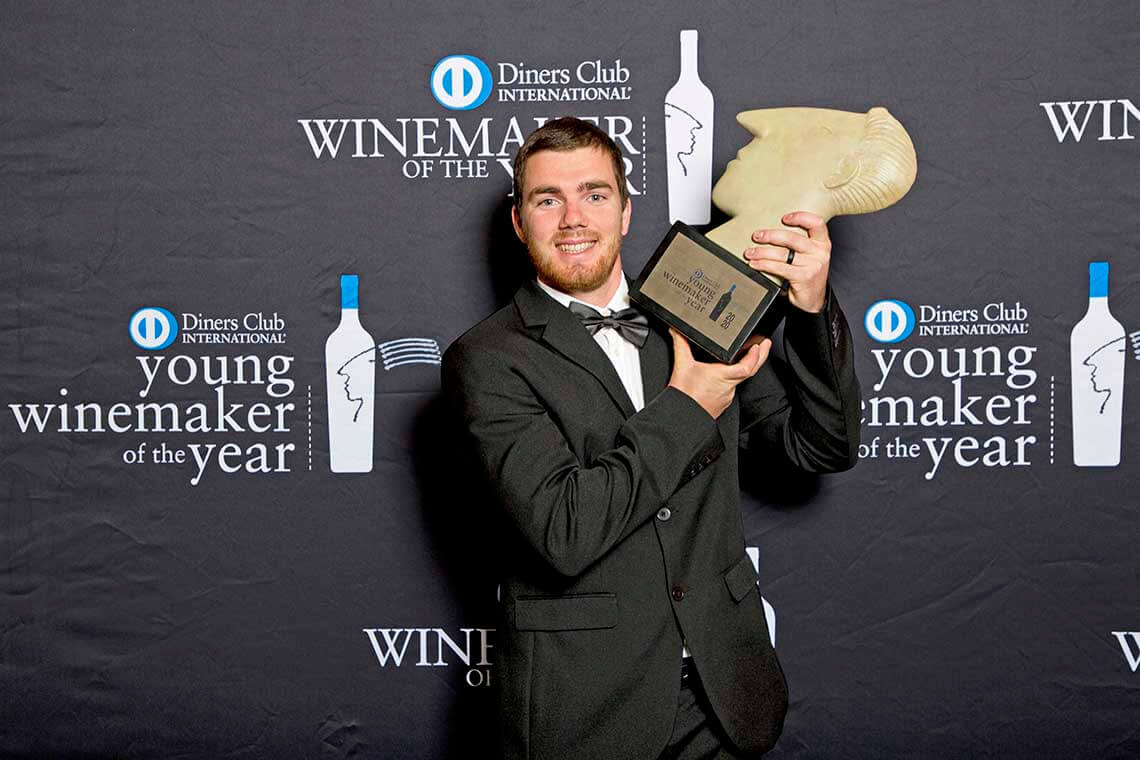 Young Winemaker of the Year

Phillip Theron is the assistant winemaker at Glen Carlou. It is his first permanent position after completing his studies in Agricultural Management focusing on the wine industry.

Phillip says the for category for Young Winemaker “any winemaker under 30 could enter absolutely any red wine and I knew the competition would be tough. There were many entries and a wide variety of different wines”.

“To know that your wine stood out among the top-class wines, is an honor. When I heard that I had two wines in the final, I couldn’t believe it at first,” he says with a smile.

“Hearing my name at the awards function, gave me goosebumps and I was happy that hard work pays off. It means a lot to achieve the title at a young age. From here I can just grow and become an even better winemaker.”

Phillip says he believes the Tannat stood out, because Tannat isn’t a cultivar often used as a single varietal in the Stellenbosch region – it is rather used in blends.

Phillip says 2020 was a very tough year, with much uncertainty. “The pandemic changed a lot of things in the wine sector, but also in hospitality and tourism. I think we must stand tall and continue the good work we do and love”.

“The prize money will come in handy for a nice December holiday”. The prize includes a trip to a wine-producing region and he is thinking of the USA, to visit the Napa valley.

He says his mentor is the senior winemaker at Glen Carlou, Johnnie Calitz. “I am grateful to work with him and have learnt a lot from him in the four years that we have been working together.

“I believe you must be confident in your decisions and love what you do. There will be times when things will be imperfect and not go as planned, but how you improve on that, is what counts.”

More About the Award

The Winemaker and Young Winemaker awards, focus on quality and recognizes excellence. It celebrates vintners’ skills and talent. The awards are open to all in the South African wine industry at no cost.

The Diners Club Winemaker of the Year awards were founded by wine legend Peter Devereux and Hugh Peatling, CEO of Diners Club at the time. The first award was presented in 1981.

Diners Club is a globally recognized brand and available in more than 185 countries.

Whether you toast Christmas and New Year with the bubbles from France, or the vineyards of South Africa or Italy, it is ...

How to Pair Your Festive Eats with Festive Drinks

With the festive season on our doorstep it’s no secret that we all love to indulge this time of year with something de...