The History of J. Denuzière

The French estate J. Denuzière in Condrieu in the northern Rhône, celebrates its 145th birthday this year and 11th as wine producing estate. Its story originated in 1876 when the small ‘Vins Paret’ company owned by Joanny Paret, delivered Condrieu wines on horses within a 25km radius around the village. His biggest customer was the church as the wine was used for mass. He was followed by his son, Joseph, who carried on his work for another 40 years.

In the 1940s, Pierre Denuzière, Joanny’s Paret son-in-law, took over the reigns and renamed it Vins Denuzière. Under his leadership and later that of his sons Jean and Joseph, it became one of the largest wine distributors in the region. In 2003, the family sold Vins Denuzière to Michel Picard. 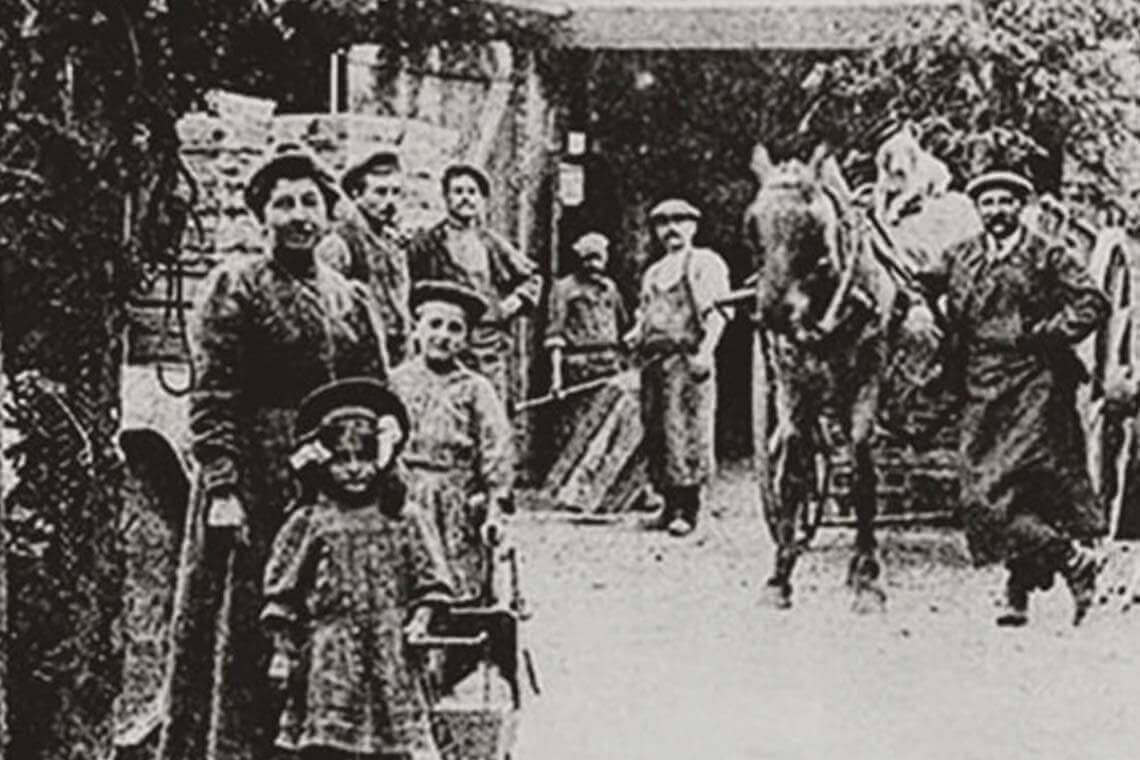 The history of J.Denuzière continues to write itself in the same place, where many generations have shared a common passion: wine.

The business model changed in 2010 from wine distribution to wine producing under the estate brand name, J. Denuzière. The new company changed its focus and produces high end Northern Rhône wines, under the J. Denuzière brand name. A one hectare vineyard in Condrieu and 1.5 hectares in Cornas were purchased and new partnerships with top winegrowers from other Northern Rhône appellations were also created.

The Northern Rhône appellation accounts for less than 5% of the total Rhône wine production.

The harvest at J. Denuzière is done by hand and sorted in the vineyard before entering the cellar. Natural winemaking techniques combine tradition (whole bunch fermentation, foot stomping) and modern tendencies (thermo-regulated vats). Aging continues in vats or in barrels for several months. 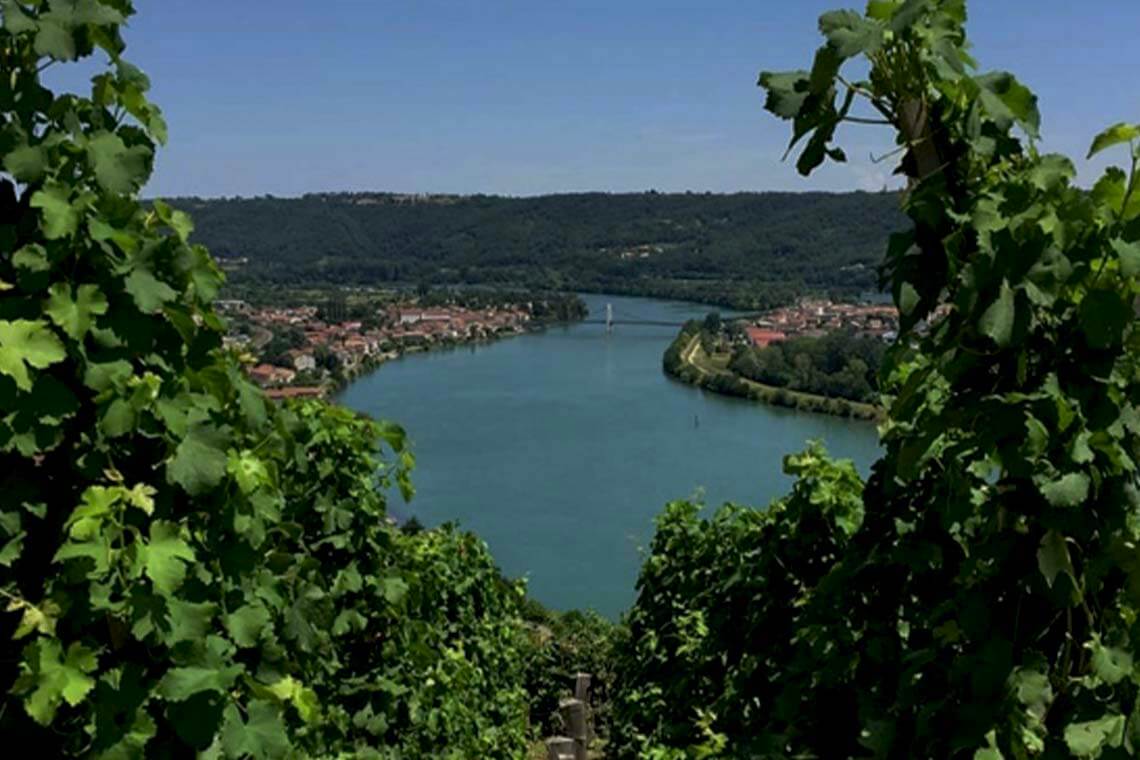 The vineyards with the best views

Samuel Montgermont and Caroline Moro arrived on the estate in 2013 and overseas production. Caroline has always been intimately linked to wines. Originally from Burgundy, she first surveyed Burgundian climates before enrolling in agronomy, viticulture, and oenology studies in Bordeaux. Once graduated, she began her journey of the discovery of French and European vineyards and the winemaking processes during experiences in Spain and Switzerland. Then she came back in France in the Loire Valley, Languedoc Roussillon and finally in Provence where she became a real specialist in Mediterranean rosé in some prestigious areas around Saint-Tropez.

Soon after her arrival, she made the world take notice of this estate. Her experience allows her to combine her winemaking know-how with a hint of originality tailored to the different northern grape varieties. 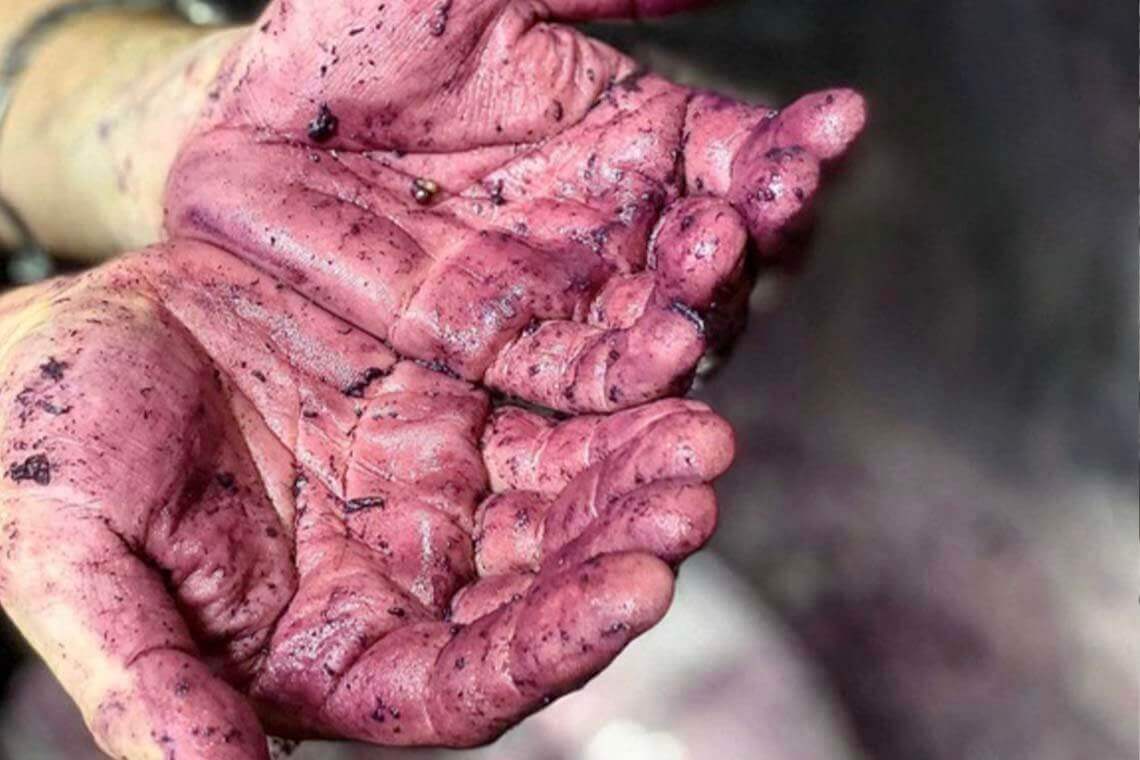 The harvest at J. Denuzière is done by hand and sorted in the vineyard before entering the cellar. 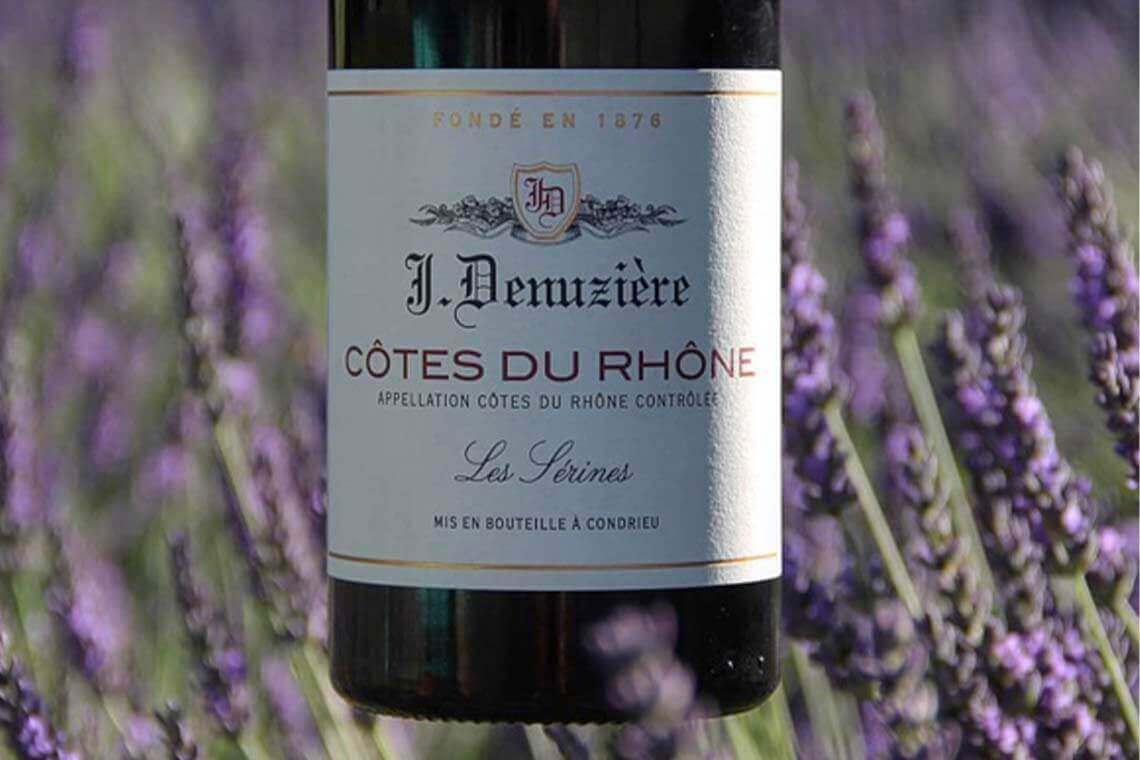 The first estate release under the J. Denuzière brand name was the 2014 vintage with a Côte Rôtie and Condrieu.

The wines available to order includes 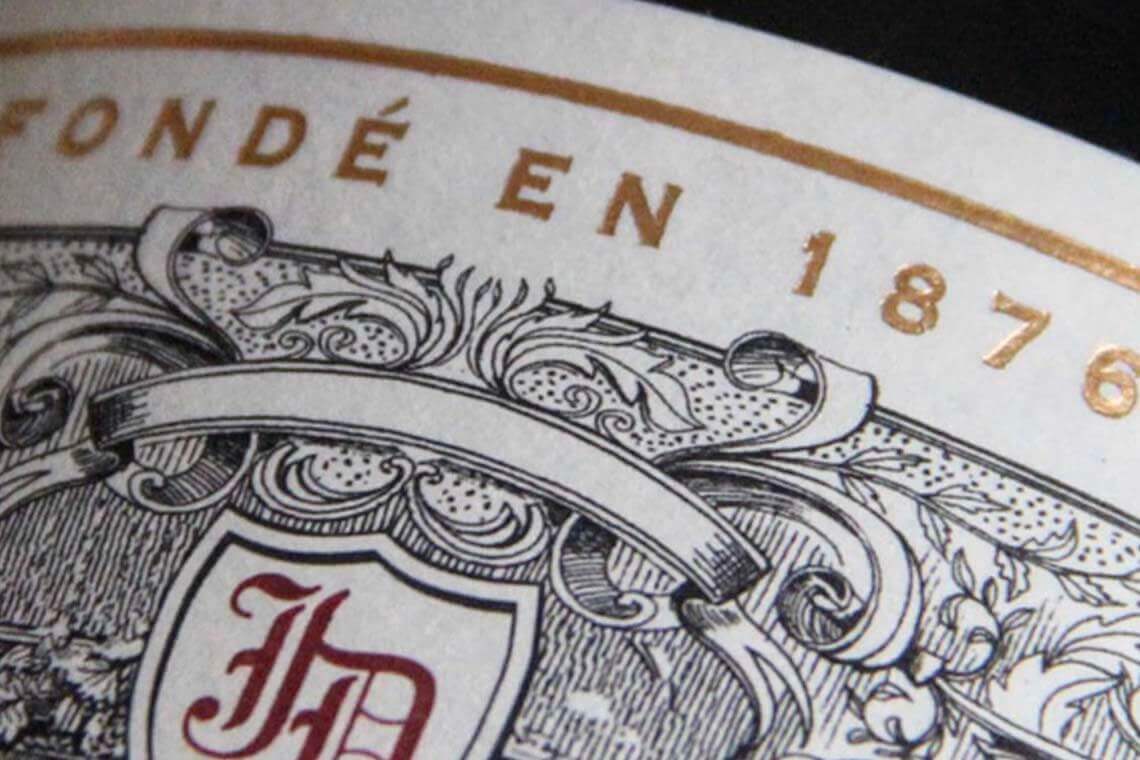 The iconic estate was founded in 1876

The first South African chef to obtain a Michelin star

Jan Hendrik van der Westhuizen is the first South African chef to obtain a Michelin star and has captured the imaginations of foodies around the world. In 2016, less than three years after opening its doors in Nice on the French Riviera, JAN received its first Michelin star. Later, Jan Hendrik expanded JAN’s borders by introducing the Kaas Kamer, where guests enjoy jams, pickled fruit, honey, nuts and a variety of local cheeses, before they relax in MARIA, the dessert venue. It was named after his grandmother, who had a profound impact on his cooking. 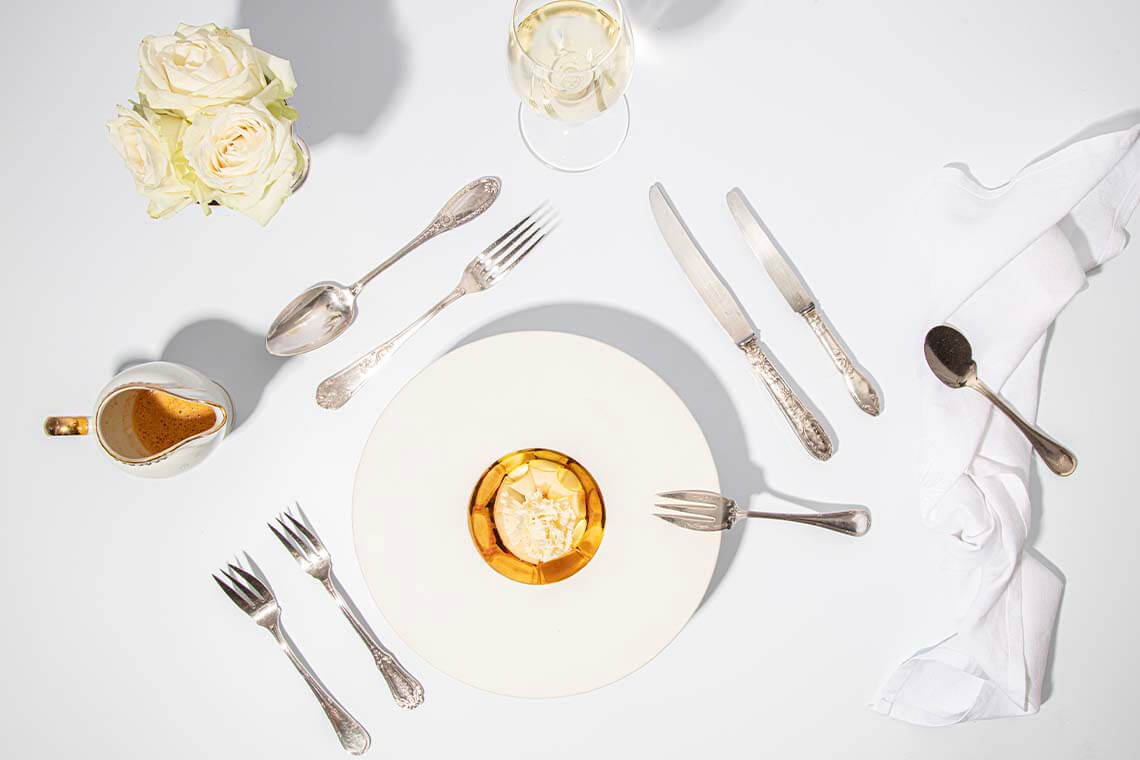 In October 2017, Jan Hendrik launched his first TV show also entitled, JAN, which recently aired its second season. This culinary travelogue captures Jan Hendrik’s journey to Michelin stardom and follows him around France and Italy, from which he draws enormous inspiration in his work. This SAFTA award-winning show is available to stream internationally.

With the launch of Restaurant Klein JAN at Tswalu Kalahari – one of South Africa’s leading private game reserves – and by establishing JAN Innovation Studio in Cape Town, JAN has taken its first steps on South African turf.

A recipe from JAN the journal to pair with the J. Denuzière Condrieu Viognier, Northern Rhône – 2016. 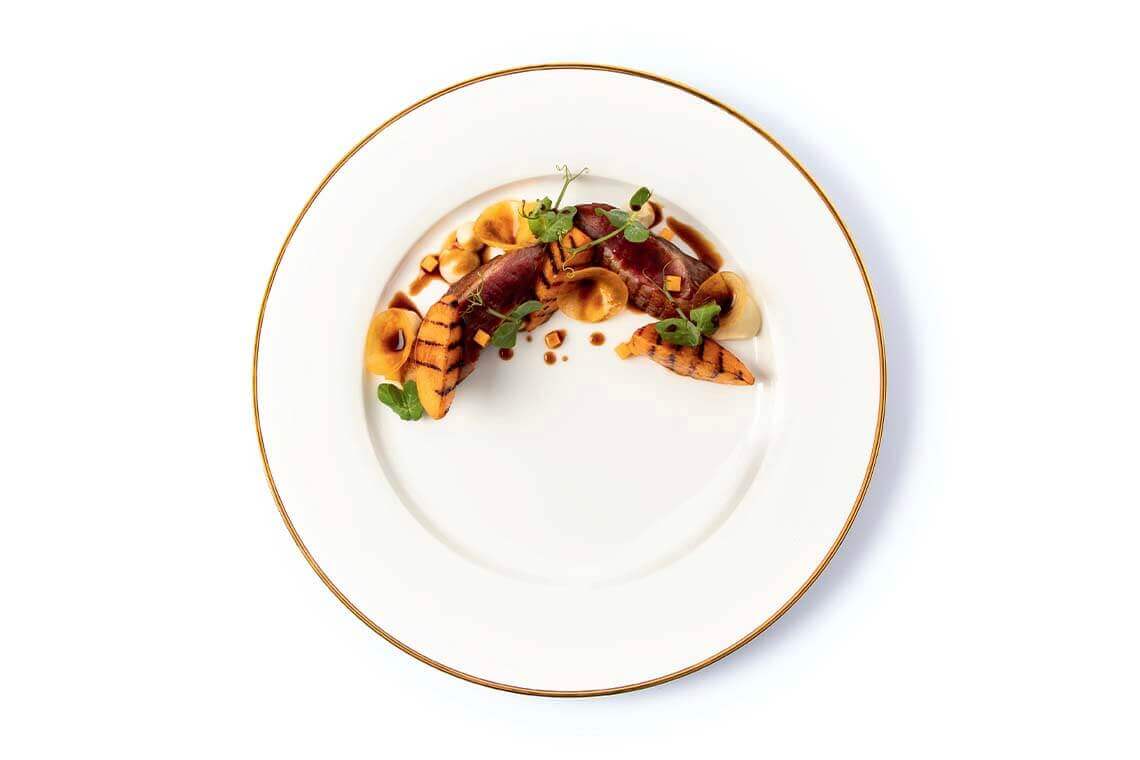 He shares this recipe for duck with peaches to be enjoyed with the J. Denuzière Condrieu Viognier, Northern Rhône – 2016.

He says, “When considering what to pair with duck, plums, cherries or oranges jump to mind. But that other stone fruit with the sunny disposition (the immortal peach) is a less classic option. Why, I cannot say, because when treated just right – and in various different ways – the result is a classic dish in the making.”

Ingredients for the celeriac purée

1 clove of garlic, peeled and sliced

Heat a saucepan over medium heat. Place the olive oil and butter in the warm saucepan.

Once the butter has melted, add the onion, garlic, and thyme. Fry until the onion is soft

and translucent. Peel the celeriac and thinly slice using a mandolin. Add to the onions and

pour in the cream. Season with salt and pepper and mix well. Reduce the heat and cook

uncovered. Keep stirring to ensure the celeriac does not burn on the bottom of the saucepan.

Once the celeriac is soft, transfer the mixture to a food processor and blend until smooth.

Ingredients for the seared duck breast

Remove the sinew from the duck breasts and lightly pat the duck skin with a kitchen towel.

Carefully score the skin of the duck breasts, taking care not to cut too deep and pierce the

flesh of the duck breast. Heat a frying pan over medium heat. Season the skin of the duck

with salt and place skin side down in the pan. As the duck breast starts rendering the fat

will release out of the skin into the pan. Be sure to drain the fat from the pan as too much

fat will cause the breast to “boil” and overcook. Reserve the fat you drain from the pan.

The breasts are done rendering once the skin is crispy and a golden-brown color.

tray. Season with salt and pepper. Heat the frying pan to a high heat, and once the pan is

breasts, flesh side down, into the pan to sear. Leave to cook for 1 – 1 ½ minutes (depending

on the size of the breast) before turning and cooking a further 30 seconds. Remove from

the pan and place back on the cooling rack. Leave to rest for 5 minutes. Use a sharp knife

to carve off the edges of the breast, then carve the breast in half at a slight angle.

Ingredients for the pickled peach

Cut the peach in half and remove the pip. Dice the peach into evenly sized cubes of 5 x 5 mm.

Place the vinegar, caster sugar and water in a bowl and stir the mixture until the sugar

has dissolved. Place the diced peaches into the pickling liquid and leave overnight to pickle.

Ingredients for the cognac grilled peaches

Heat a griddle pan over high heat. Halve the peaches and remove the pip. Slice the halved

peaches into quarters and place them into a bowl. Drizzle with olive oil and season with

salt. Once the griddle pan is hot, place all the peach slices into the pan and leave to sear

on one side. Once the peach slices have griddled lines, turn them over and grill the other

side. Deglaze the pan with the cognac and remove the peaches from the pan.

Ingredients for the fresh coned peach

Cut the peach into thin slices using a mandolin. Use a round cookie cutter with a diameter

of 2 – 3 cm and cut out circles from each slice of peach. Use a knife and slice outwards

from the centre of the cut-out peach circle slice and place into ice-cold water. The incision

and ice-cold water will curl the peach into a cone. 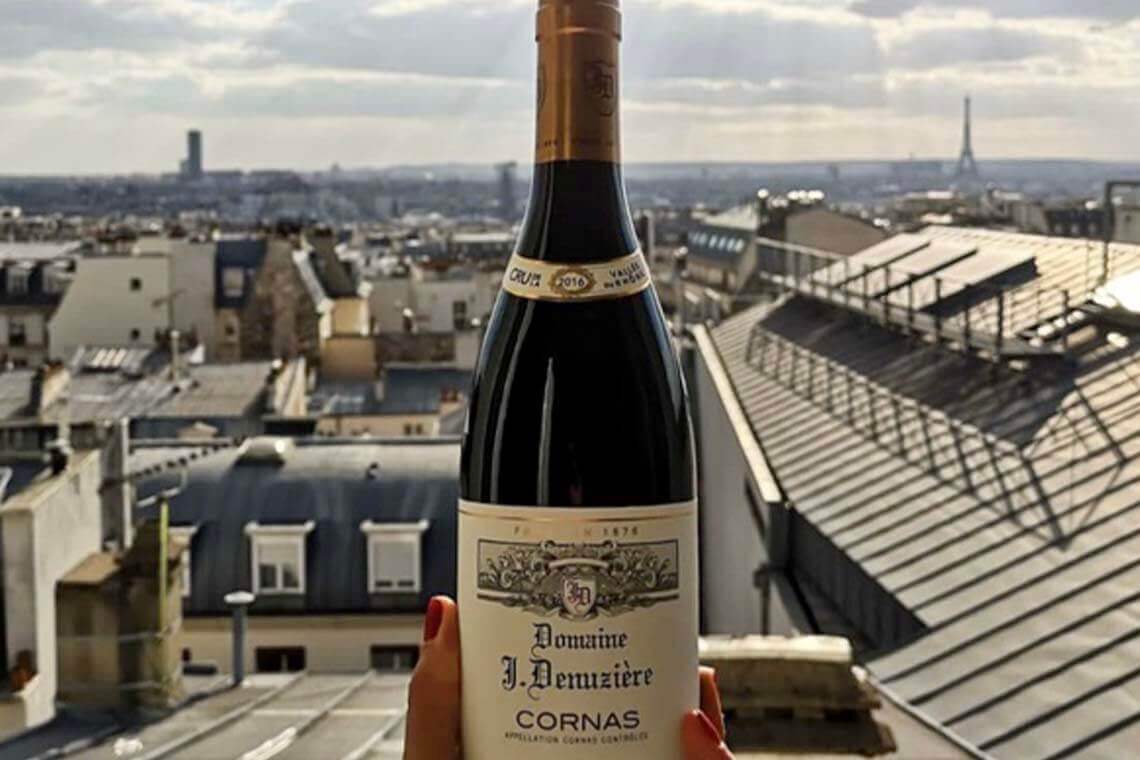 Iconic wine with an iconic view of Paris