The luxurious Marine Hermanus, part of the three properties in the Liz McGrath Collection, situated on the cliffs in Hermanus, celebrates its 120th birthday this year and boasts five stars (since 1998). In 2020 it became part of the Small Luxury Hotels of the World. 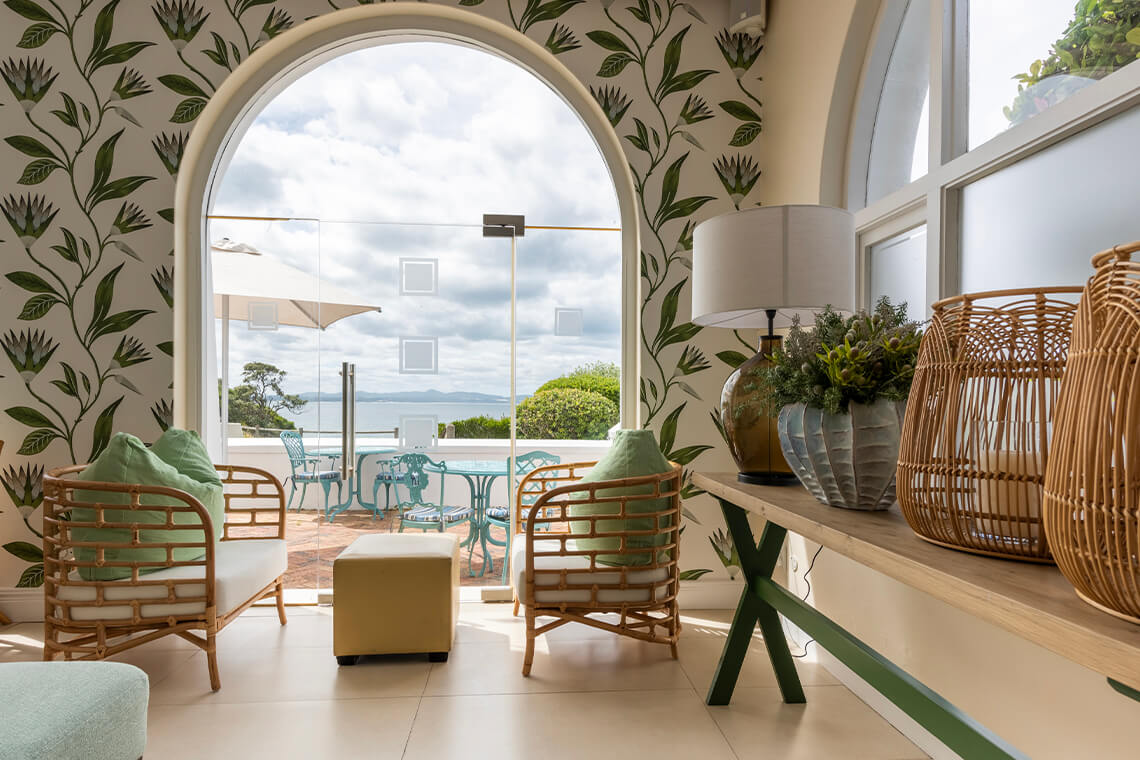 A world of luxury awaits at the Marine

In 2015 the late Liz McGrath was honored with the Eat Out Mercedes-Benz Restaurant Awards, Lannice Snyman Lifetime Achievement Award. 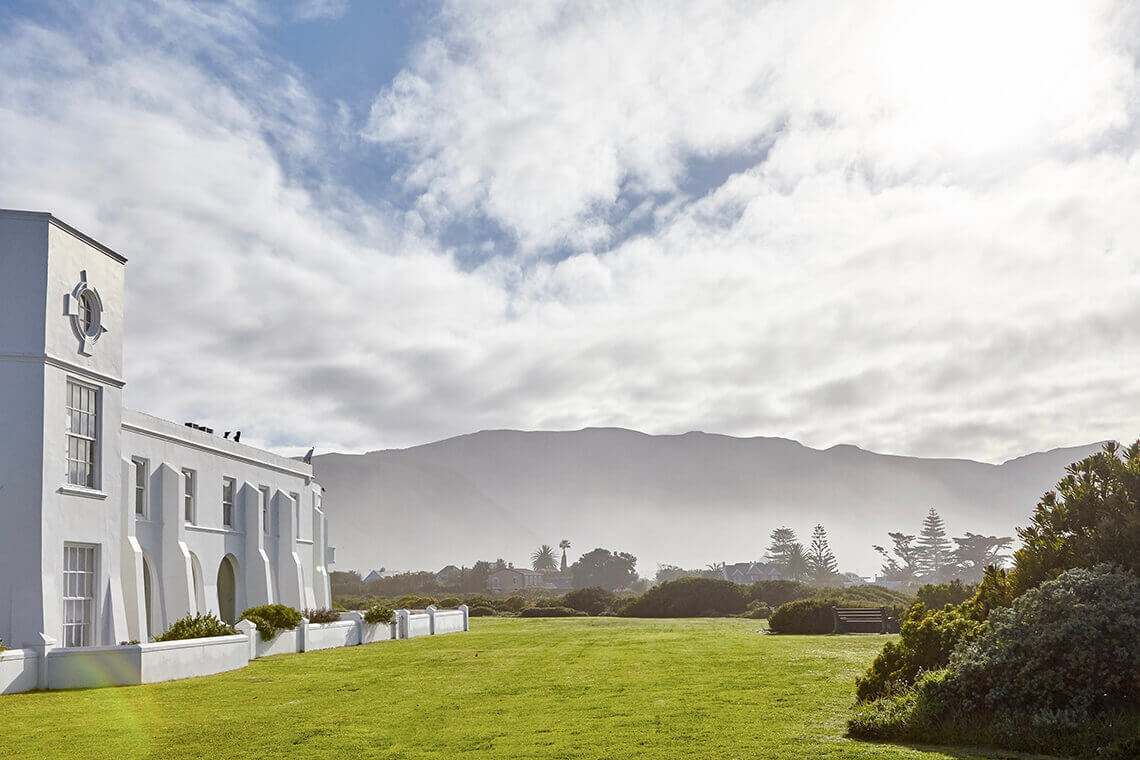 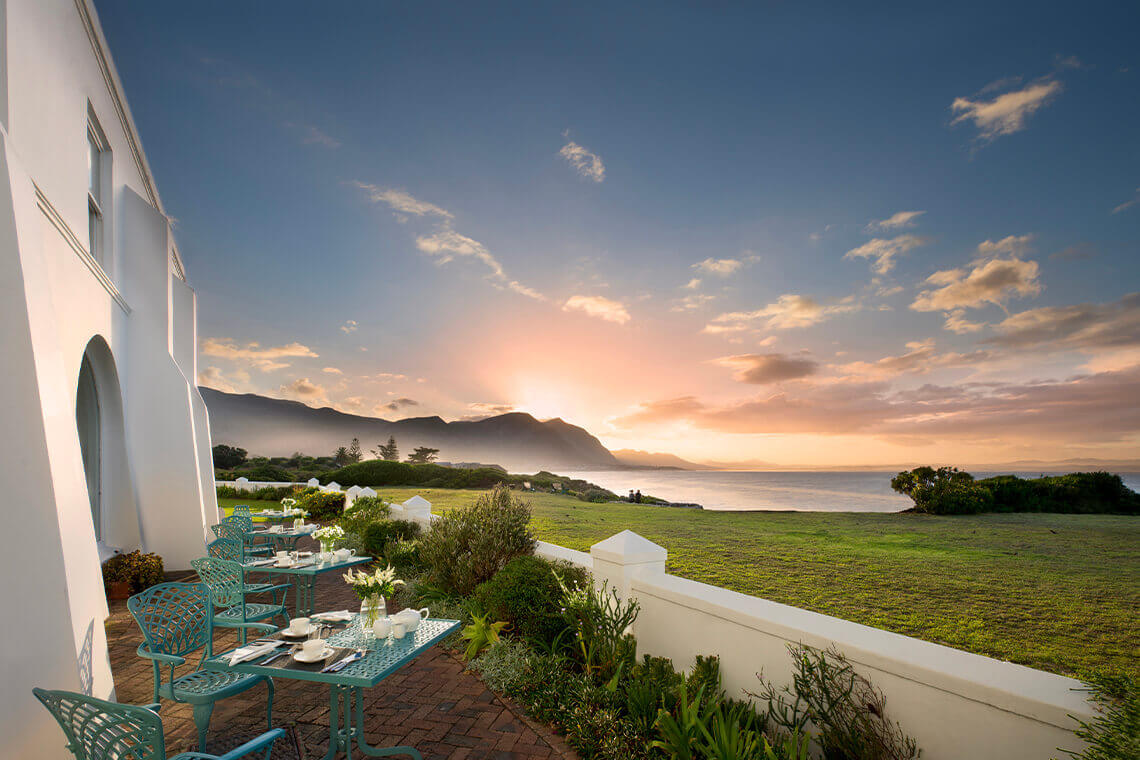 Breathtaking views can be enjoyed from the hotel lawns

Hermanus was originally named Hermanuspietersfontein after the shepherd who found the area – a popular summer grazing area for livestock in the early 19th century. The area gained popularity among local shepherds who lived off the fresh fish easily caught from the expansive Walker Bay and by mid-century the small fishing village was established. You can also read more about the neighboring town Stanford here.

Accommodation in town was consistently at capacity. Several hotels opened in the following years, starting with Walter McFarlane’s fishing cottage, which later became the Victoria Hotel. Walter McFarlane and his brother-in-law Valentine Beyers, bought land from Willem Hoffman to establish The Marine in 1902. Though modest, the hotel was much grander than their first property, the Victoria. The Marine had just 21 rooms and no running water or electricity in the bedrooms; it did however, boast modern amenities – two flush toilets on each floor. 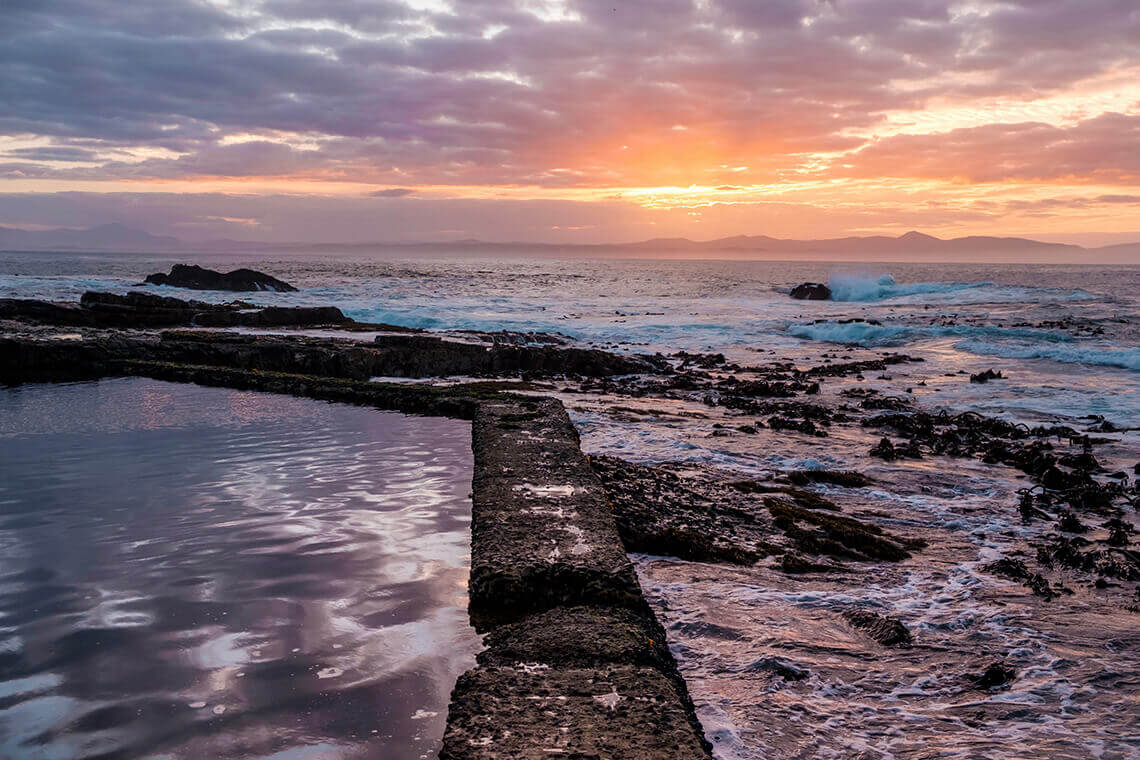 Sunset in the bay 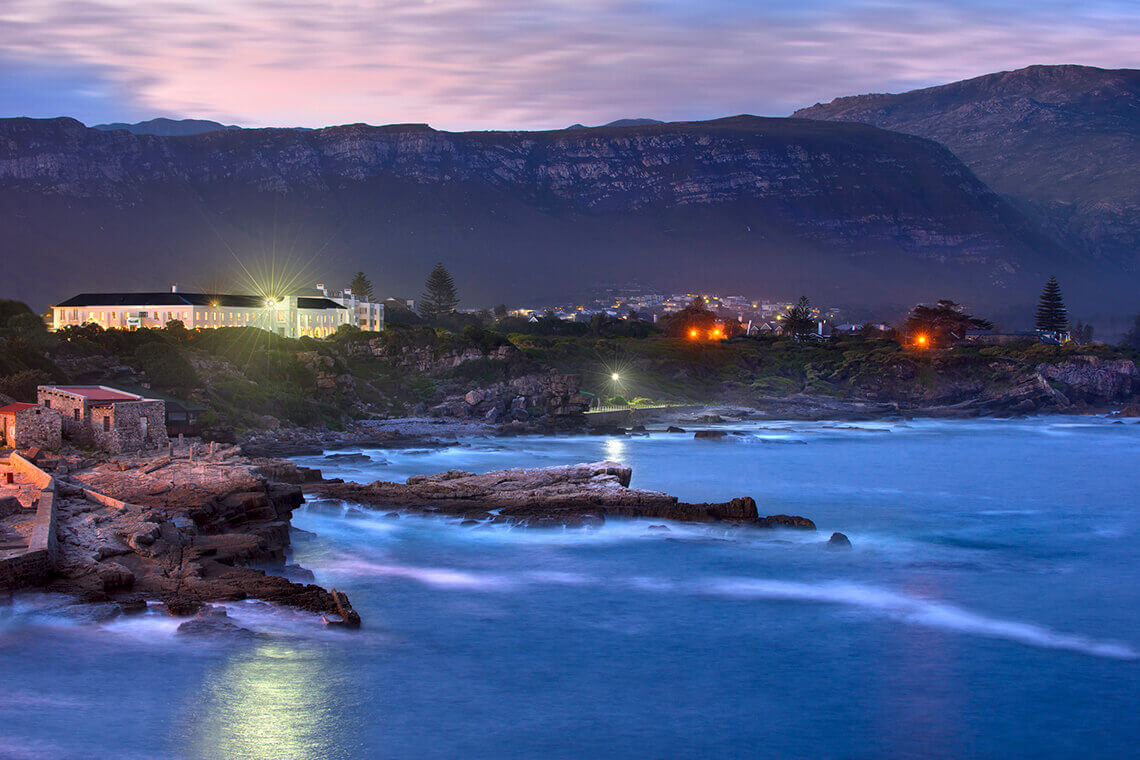 A view of Hermanus and the Marine hotel at night

In 1918 The Marine was expanded to include more bedrooms, a bathroom block and a larger kitchen. The popularity of the hotel grew along with its reputation for hosting grand affairs in its ballroom for the wealthy and well-known. Among them was Sir William Hoy, who stayed at the hotel annually for many years. Other famous guests include Princess Alice, Countess of Athlone in 1923 and the actor Brad Pitt.

David Rawdon bought the hotel, refurbished, and reopened it after four years in 1985, and over the following 13 years regained its former fame and glory. Rawdon began the search for a new custodian for this grand old lady, to bring her into a new century.

In 1998, Liz McGrath accepted this responsibility, after having garnered international acclaim for her restorations of The Plettenberg and The Cellars-Hohenort. She oversaw the restoration of the oldest hotel in Hermanus, and the second-oldest building in town. After a busy eight-month restoration period, The Marine was reopened in October 1998 as a five-star hotel. 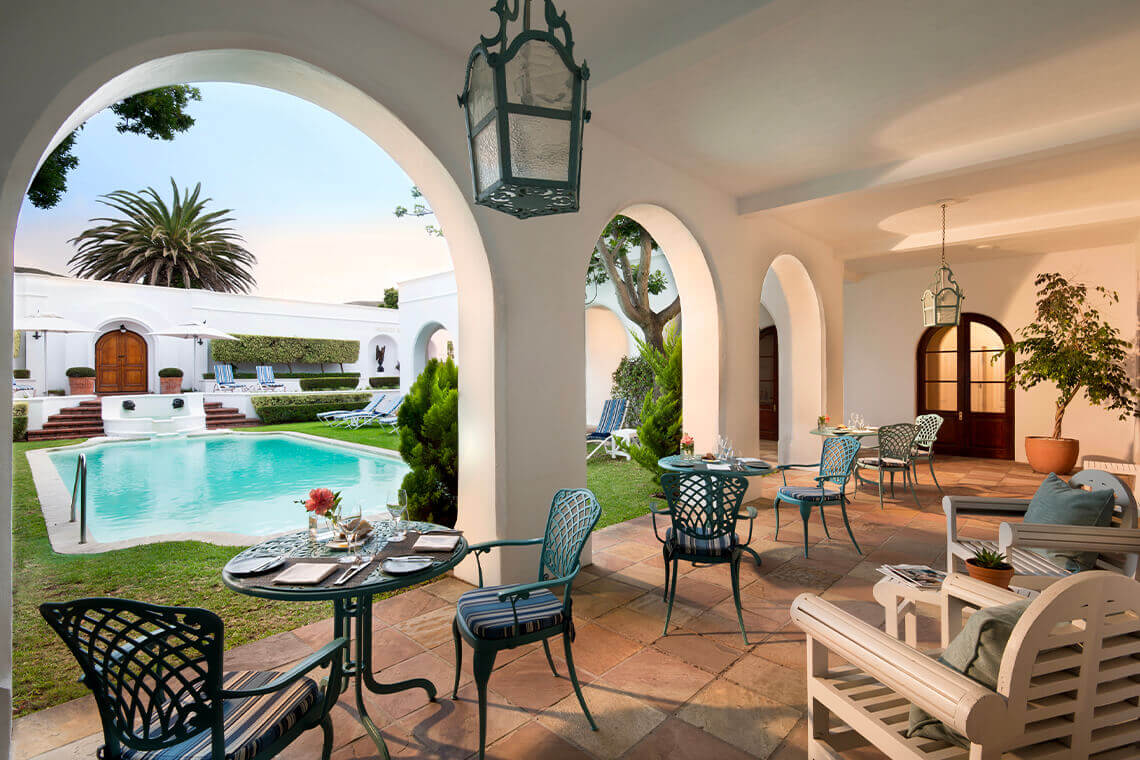 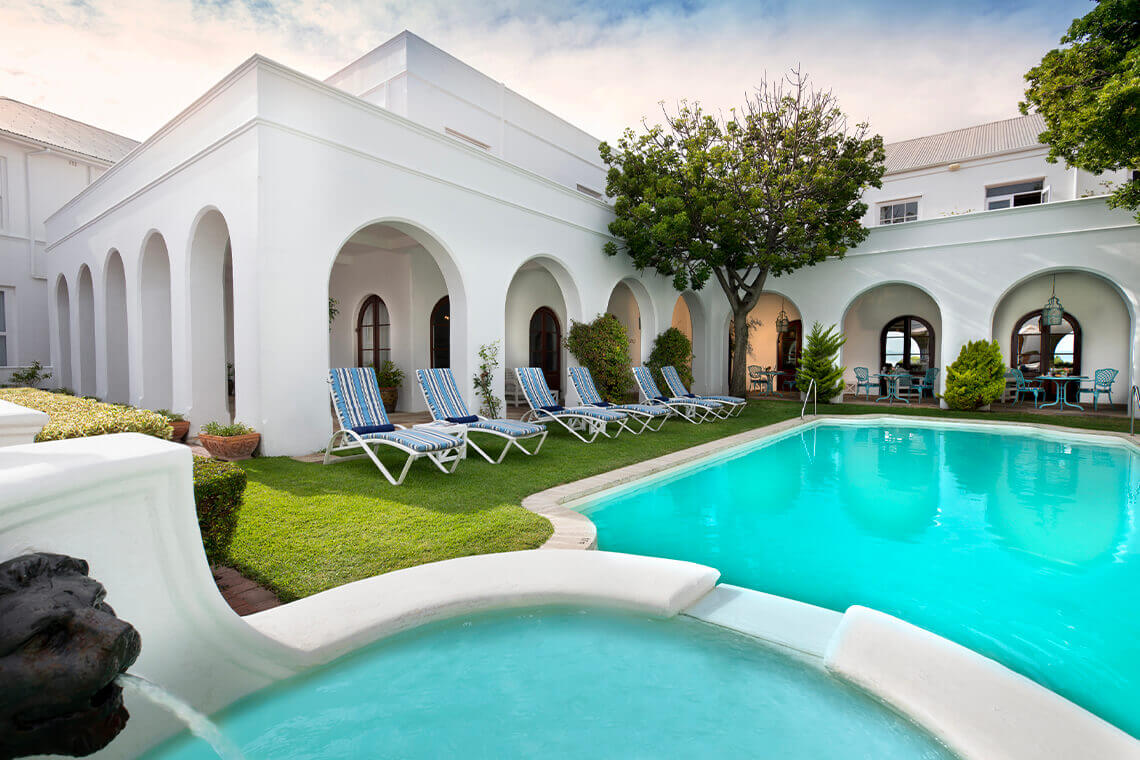 Today it consists of 40 luxurious rooms including 10 Premier Suites, a heated saltwater pool and easy access to the Marine tidal pool, the Origins and Pavilion restaurants, beauty spa, boutique and the newly decorated Sun Lounge where a decadent High Tea can be booked seven days a week. 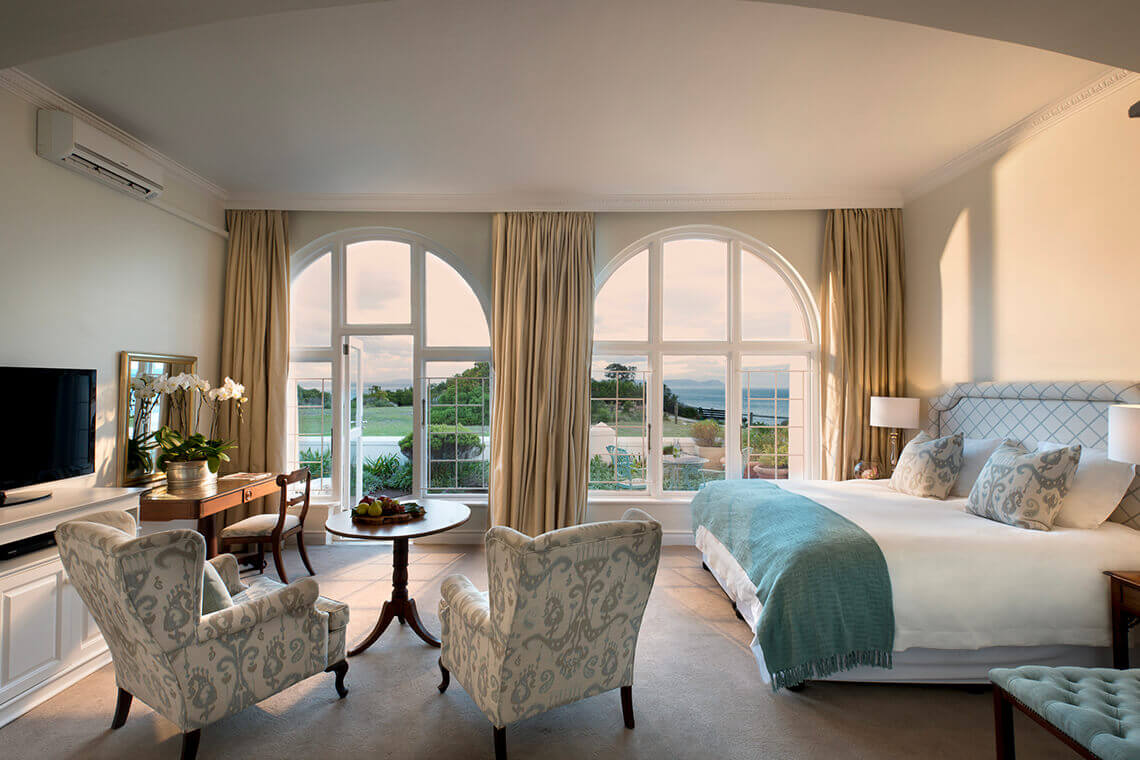 These luxurious rooms have everything you need for a restful night 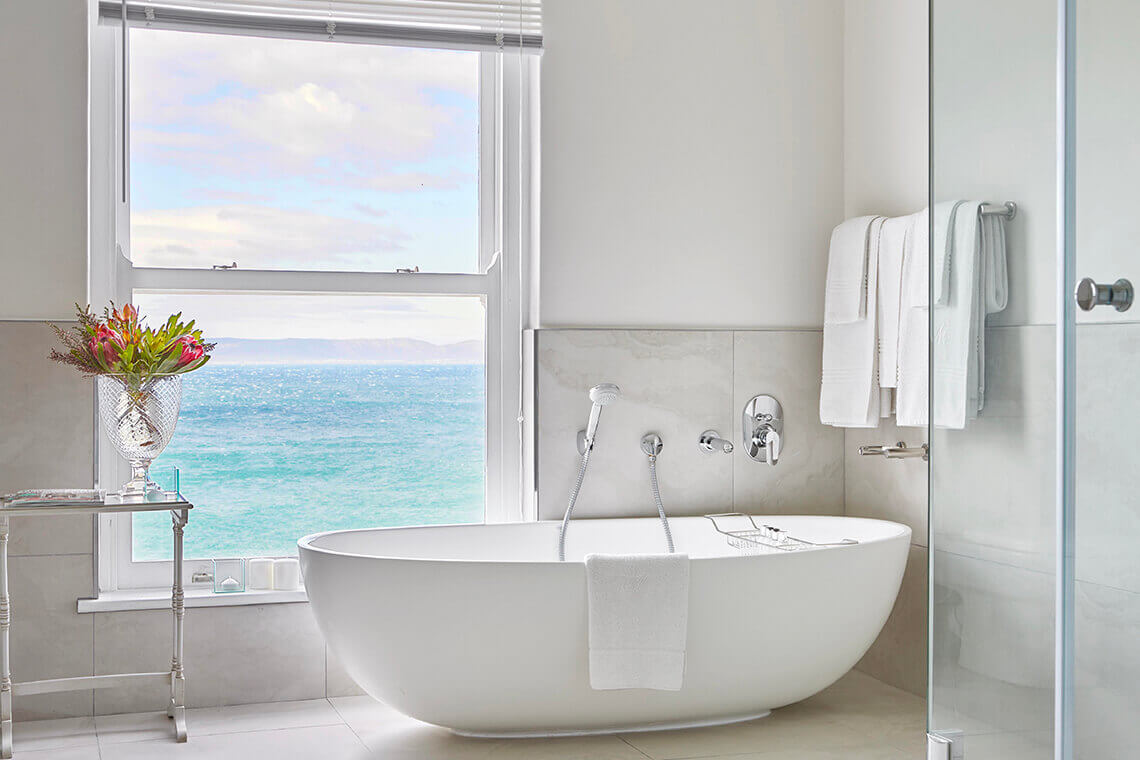 The bathtub of your dreams

What’s happening at the Marine

The Marine also offers exciting events throughout the year, including food and wine pairing dinners featuring the award-winning wines of the Hemel-en-Aarde just outside Hermanus, as well as Roasting Sundays, and festive Fish & Chips Fridays and Bottomless Bubbles to kick start every weekend. 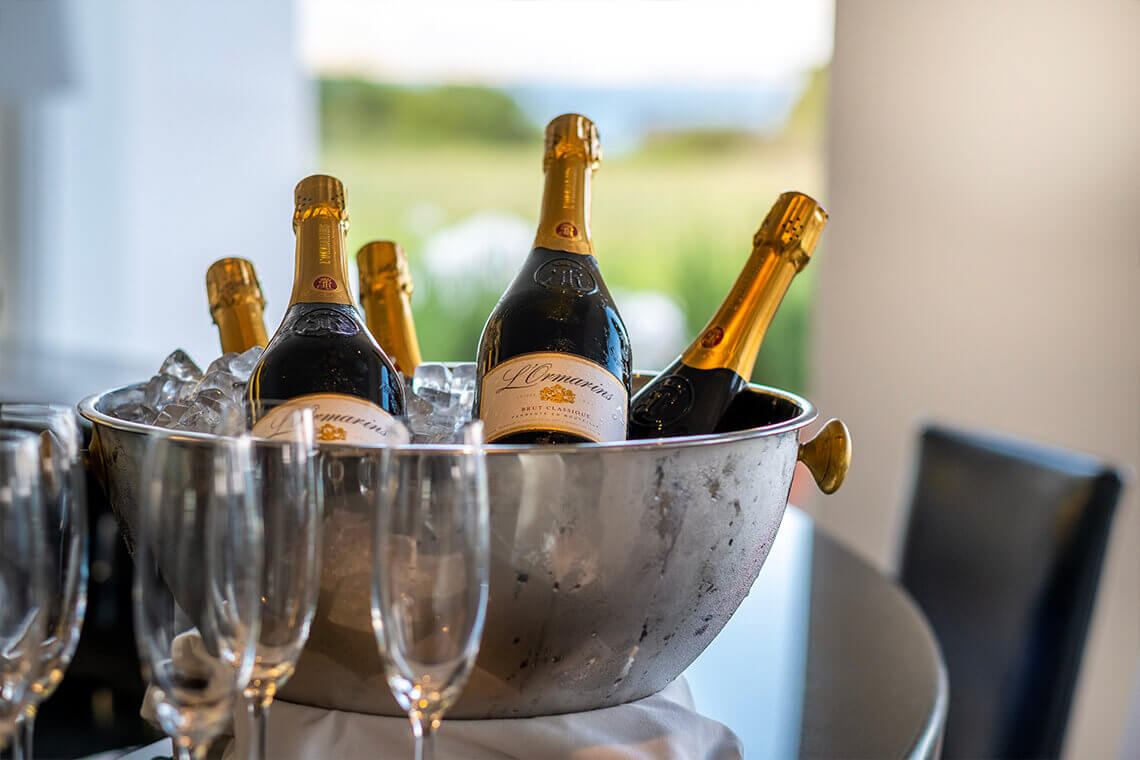 Bottomless bubbles are a big hit every Friday at the hotel 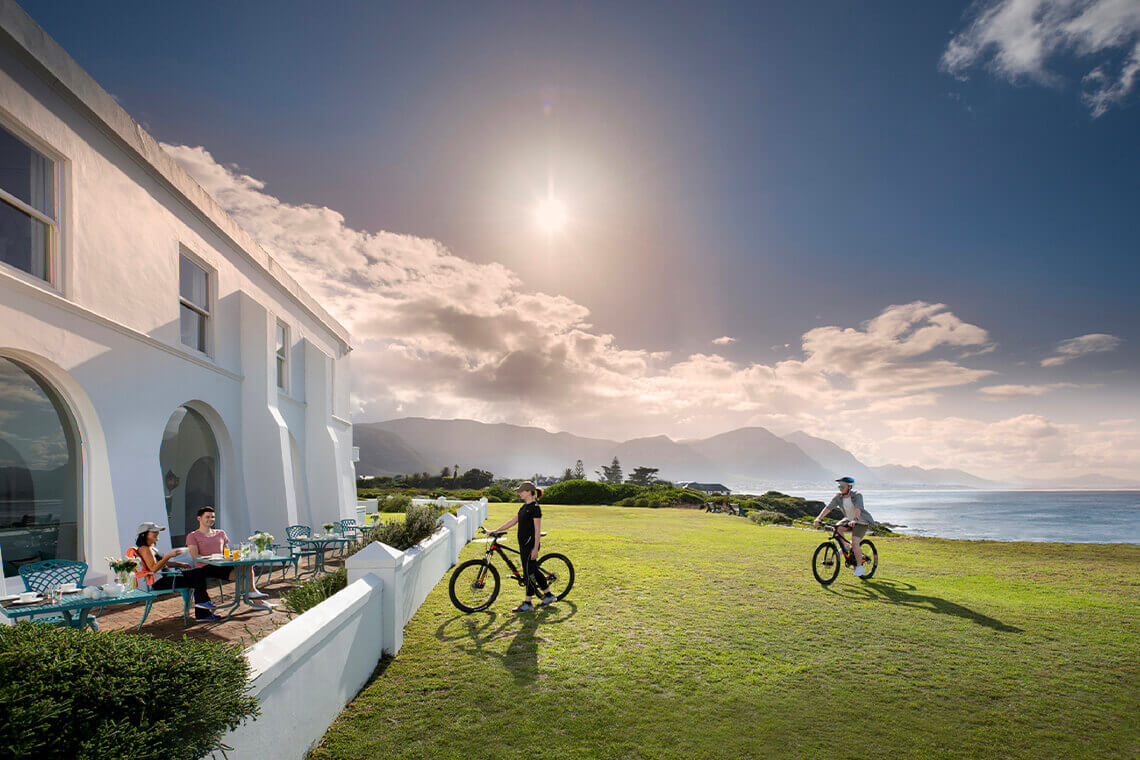 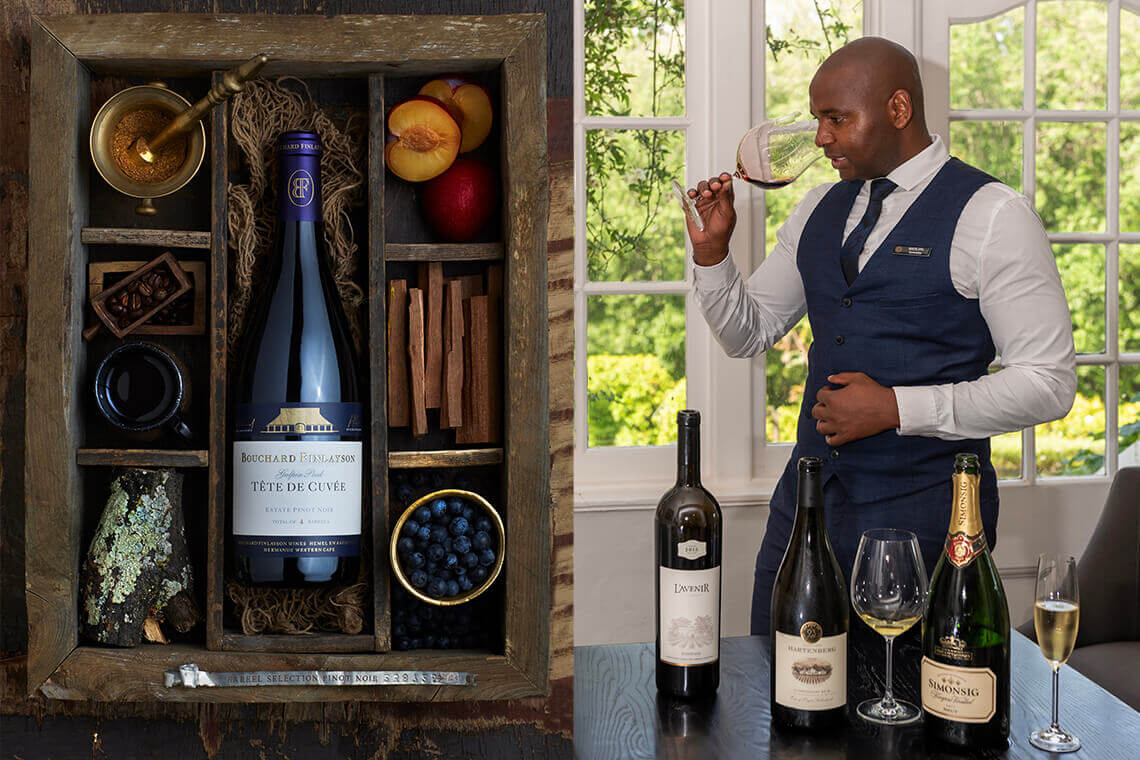 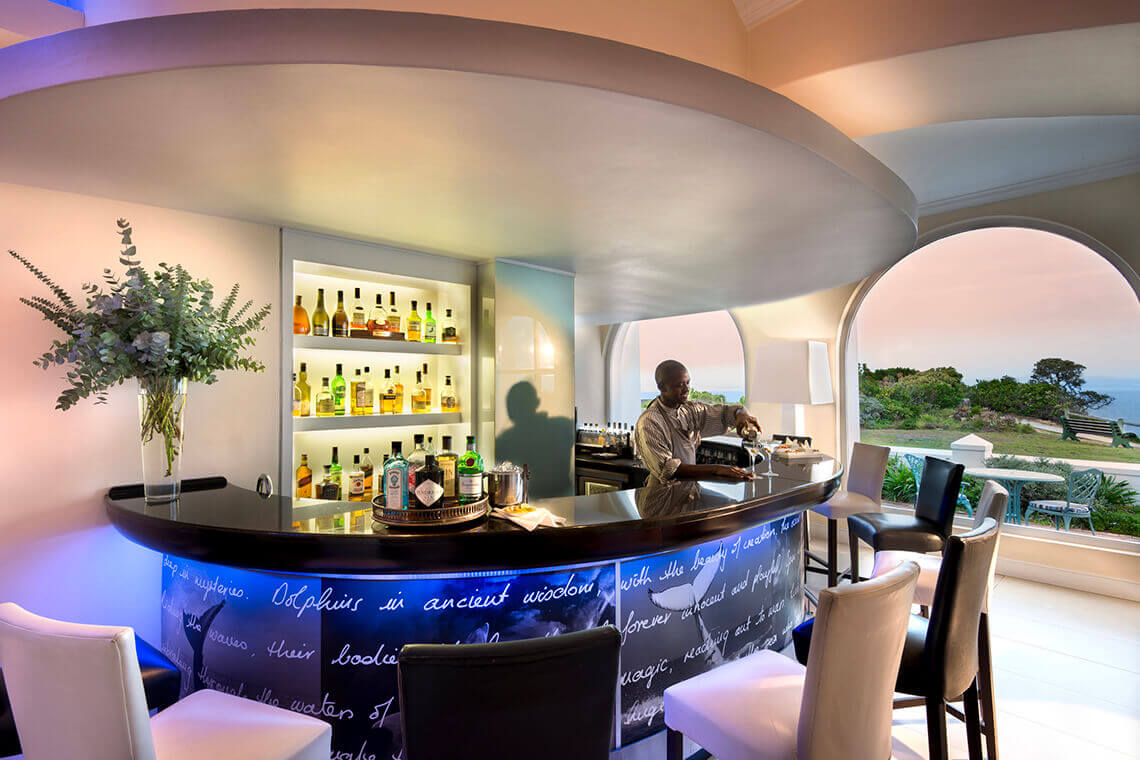 The perfect spot to enjoy a sundowner

Executive Chef Rudolph Blaauw takes charge of the kitchens at The Marine, where he likes to focus on the quality of the produce. This celebration of the produce and the talented artisans of the area come together perfectly in a menu centered around the origins of fine food. Paying homage to its seaside location, The Marine likes to support ethical fishing and buys from local fishermen who catch fish by the line.

Starters include fresh seafood and a variety of interesting and healthy salads, while main courses are divided into specialties from ‘The Sea’ and ‘The Land,’ with dishes highlighting the produce of the Overberg. Rounding off the menu is a selection of mouth-watering desserts, including the Chef’s personal favorite – Wesley’s Fynbos Canelés de Bordeaux with Madagascar vanilla ice cream and gummi bears of the region. 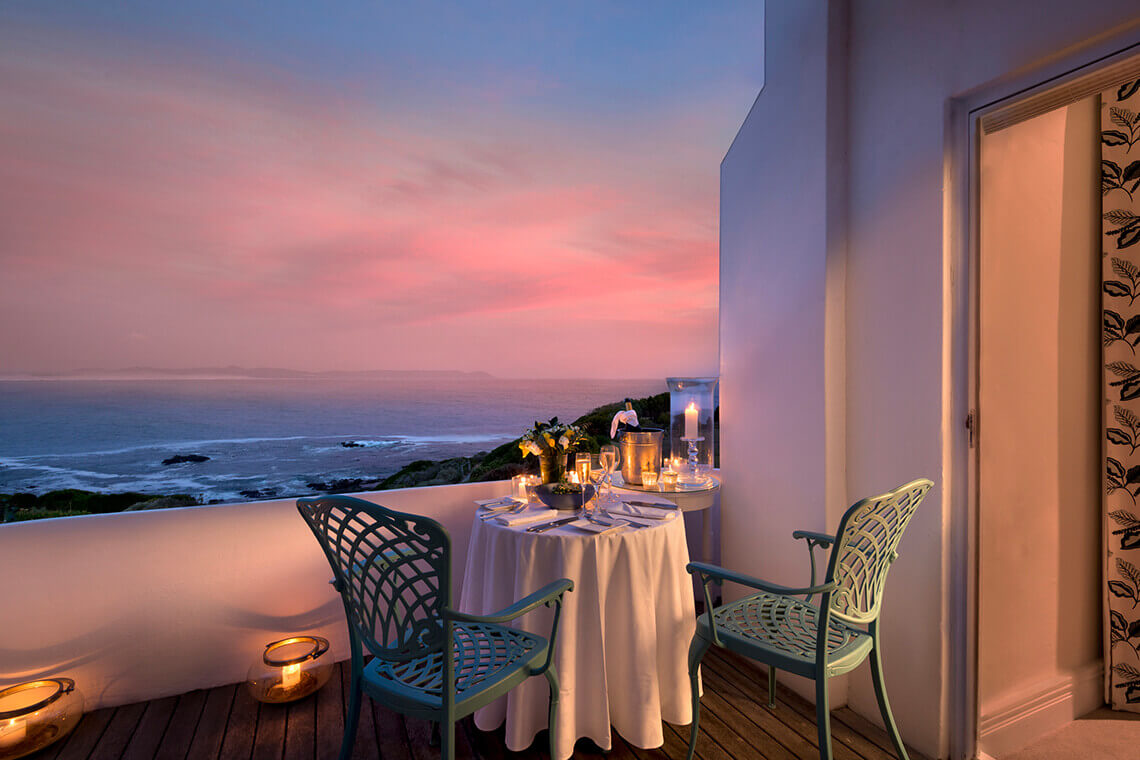 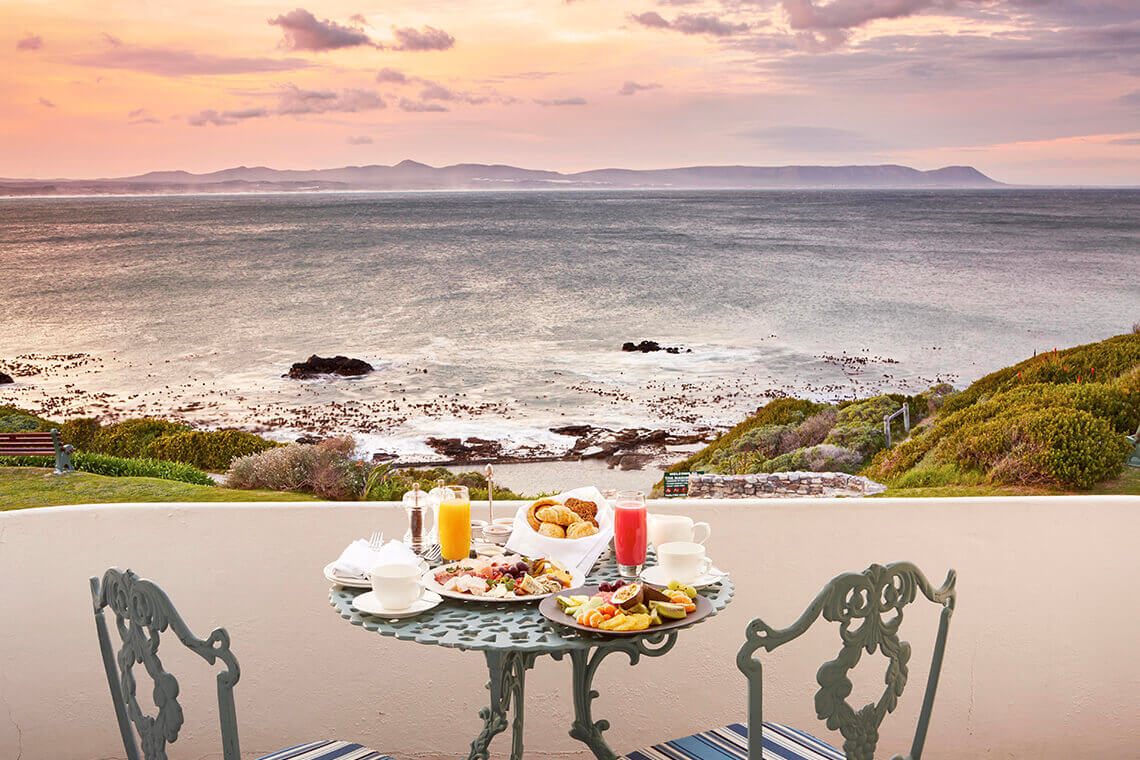 Or watch as a new dawn breaks with a scrumptious breakfast

One of the late Liz McGrath’s favorites, this is the perfect cheese soufflé to be enjoyed with your chilled Chardonnay, Viognier or aged Chenin. 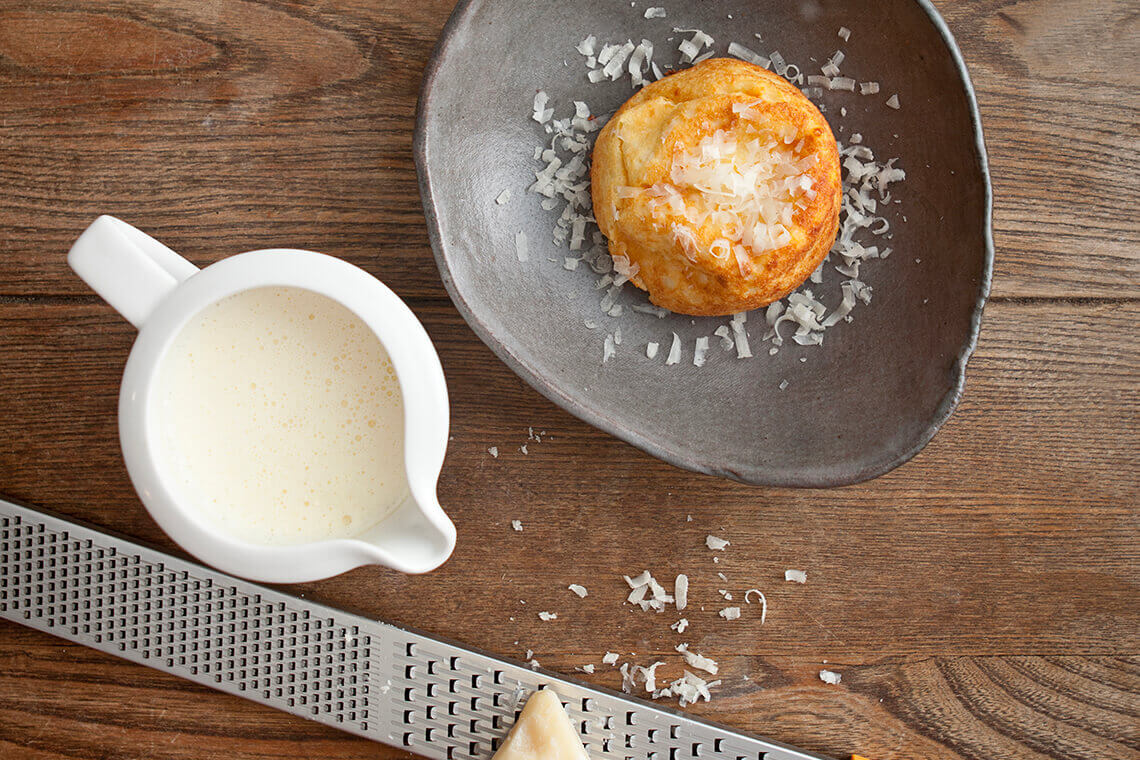 A successful cheese soufflé is light, airy, and delicately savory. There are only a few critical points to achieving the perfection. Be quick to mix the egg yolk mixture into the sauce mixture to avoid lumps and scrambling the eggs.
During the baking process of the egg mixture, the air bubbles trapped in the egg whites expand, and make the soufflé rise. The protein stiffens a bit with the heat, and along with the fat in the egg yolk, it forms a kind of support that keeps the soufflé from collapsing.
If you don’t have mini soufflé dishes or ramekins, appropriately sized, ovenproof mugs will work. Don’t forget to butter and coat them in Parmesan or breadcrumbs.

Method
In a pot, melt the butter, add the flour and cook gently for 5-6 minutes, until flour is cooked.
Using a spatula, slowly add the milk onto the flour-butter paste until smooth, then take off heat and add the cheese; mix until the cheese has been mixed through properly, then set aside and let cool.
Add the egg yolks, salt and chives; whisk up the egg whites and gently fold into the mixture.
Pour into a greased and Panko (bread crumbs) lined ramekins and bake at 150 degrees for 1 hour.
Rotate the tray of soufflés after 30 minutes, then check and cook for another 10 minutes if necessary.

Method
Bring the cream to the boil, then add Parmesan cheese and the Gin. Stir well, season to taste. 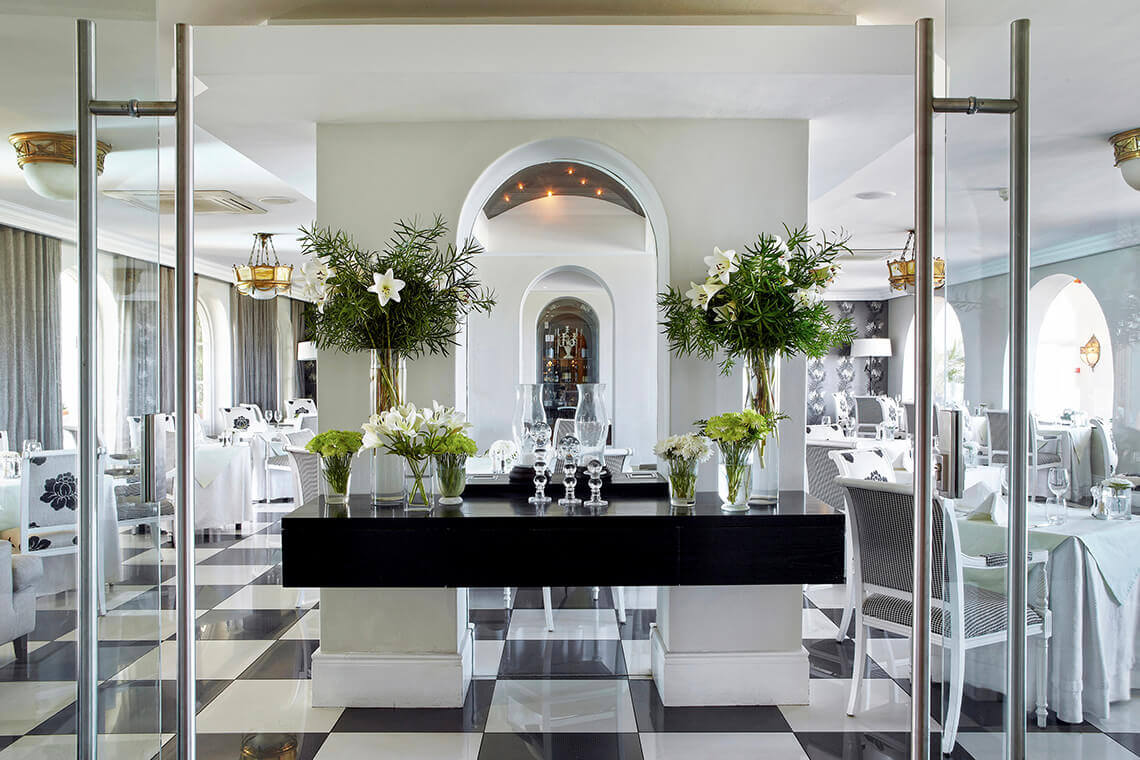 An epic time awaits at the Marine hotel

What are you waiting for? Luxury awaits!

Shop premium wines from around the globe here and follow Sip & Read to stay up to date on the best travel and wine news. Cheers!