How Pinot Noir became one of the world’s biggest wines

Pinot Noir is celebrated on August 18, the appointed day when the grape variety is highlighted the world over.

The spiritual birthplace of the red wine grape is Burgundy, France’s east-central region also known for Chardonnay. Both are commonly ingredients of sparkling wines including Champagne. The region is also home to some of the world’s most expensive wines, which explains part of the incentive to make them. 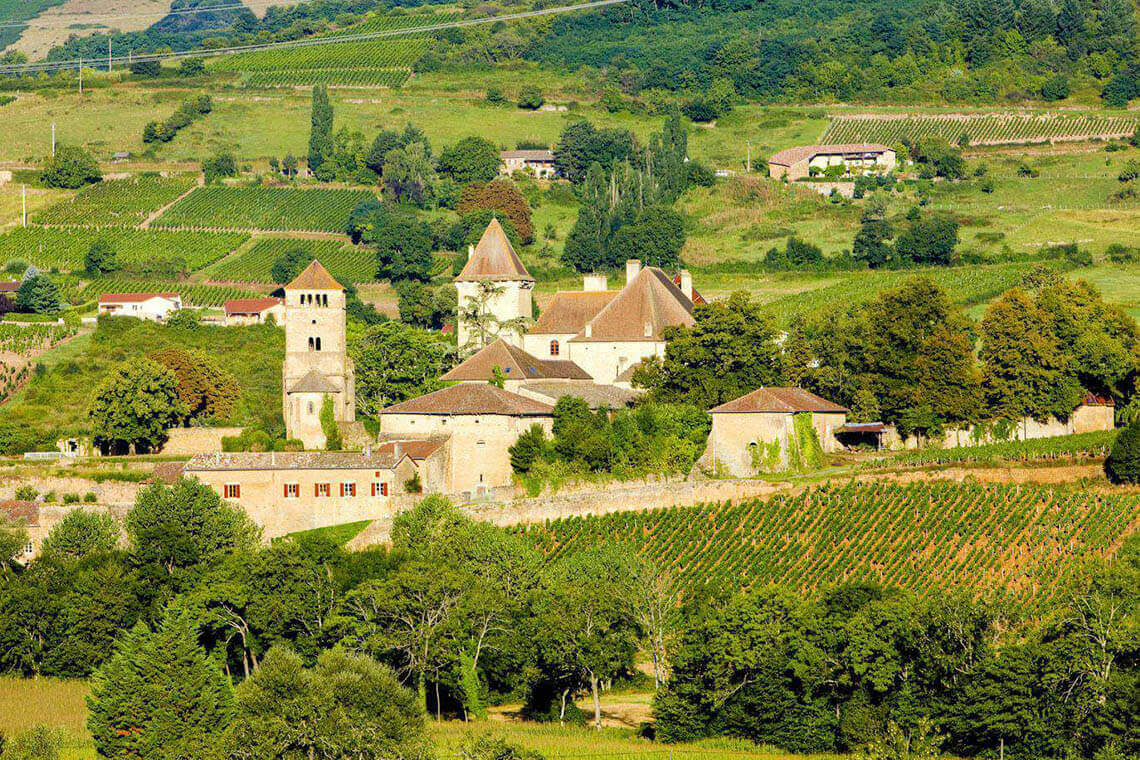 Burgundy, the birthplace of Pinot Noir

The world’s biggest Pinot Noir producers are France, Germany and America. Pinot Noir is the natural cross relation of Chardonnay and Gouais Blanc, a varietal that is close to extinction. It is related to all of the Pinots (Noir, Gris, Blanc, Meunier, Teinturier and Noire Précoce) and with such diversity, it is one of the few varieties that is produced into a red, white, rosé and MCC/Champagne.

But its relatively higher pricing also reflects the risks involved in making the wine. Unlike most others, Pinot Noir is notoriously difficult to farm because of how sensitive it is to its environment and its fragility.

Nonetheless, as greater understanding and technology has become available to producers, so too has the variety spread around the world. Locations where Pinot Noir is cultivated with great success include even seemingly remote places such as Tasmania. 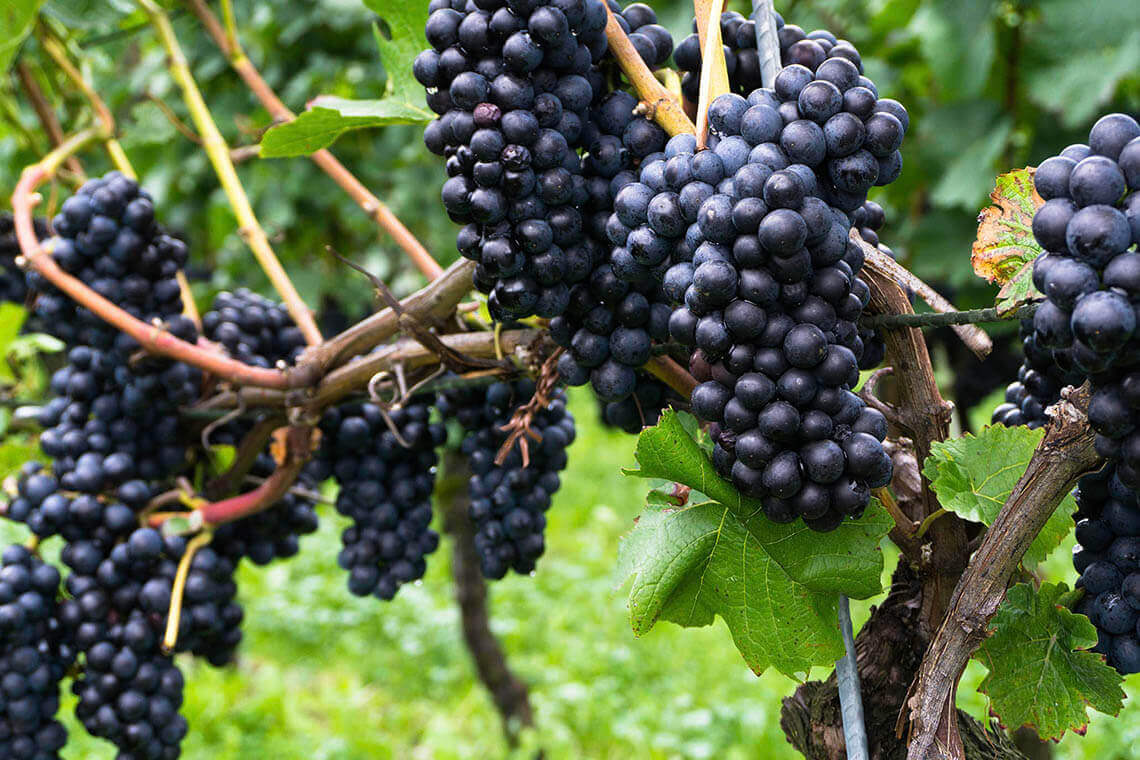 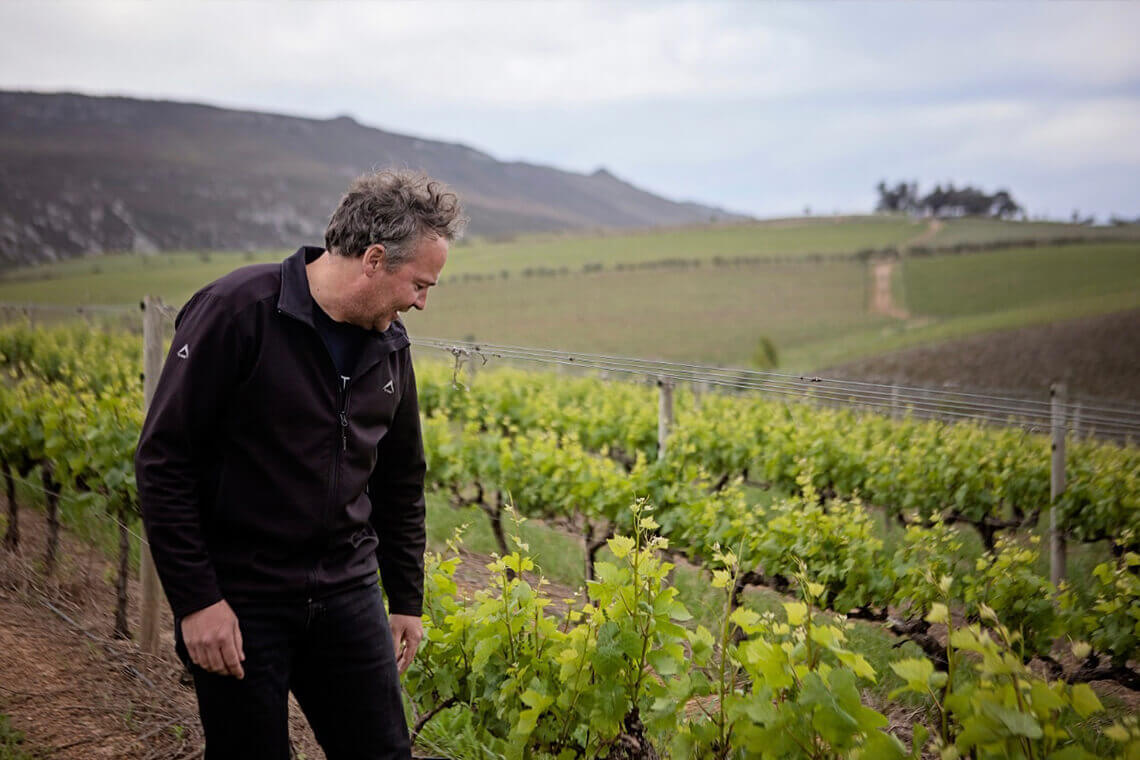 Regions like Burgundy where the grape thrives, have become imbued with its success. In South Africa for example, cooler areas such as Elgin, Hemel-en-Aarde and more recently the Agulhas Wine Triangle have led the production of excellent Pinot Noir expressions. 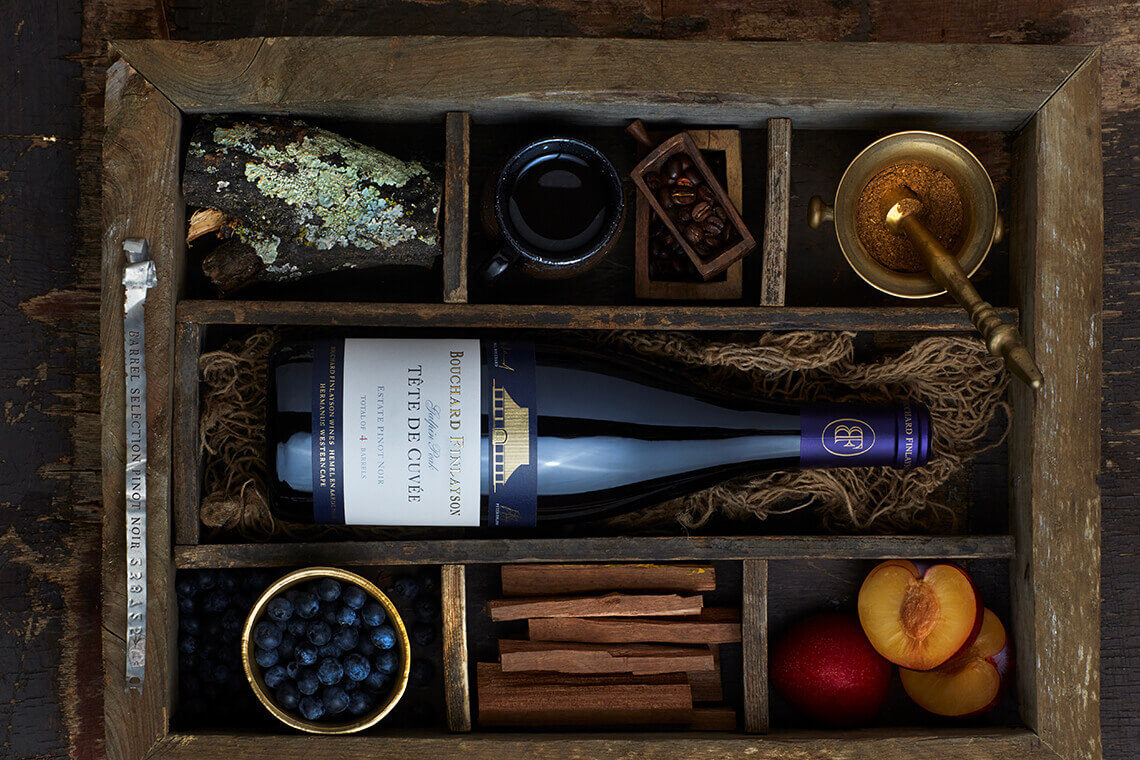 Many of the wines are consistently awarded, such as the Bouchard Finlayson Tête de Cuvée Pinot Noir 2019 winning Gold at this year’s Decanter World Wine Awards. Peter Finlayson was one of the pioneering winemakers to plant and make Pinot Noir in South Africa.

Other highly acclaimed South African Pinot Noirs include the Creation Pinot Noir 2020; the Vriesenhof Pinot Noir 2018, the Muratie George Paul Canitz Pinot Noir 2017 and a variety of La Vierge Pinot Noirs ranging from the Noir 2016, The Affair 2018 or Apogee 2015. Other farms such as Haute Cabriere, Leopard’s Leap, Whalehaven and Paul Cluver also offers superb examples of this variety. 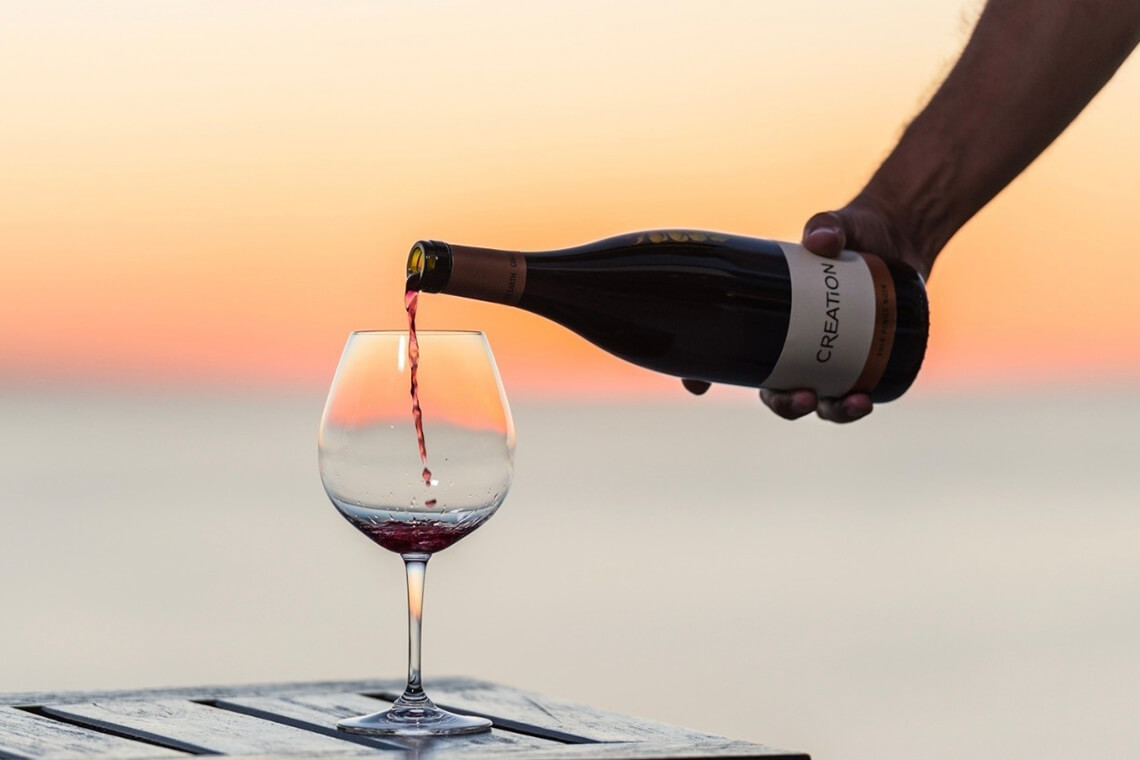 Creation Pinot Noir with a view 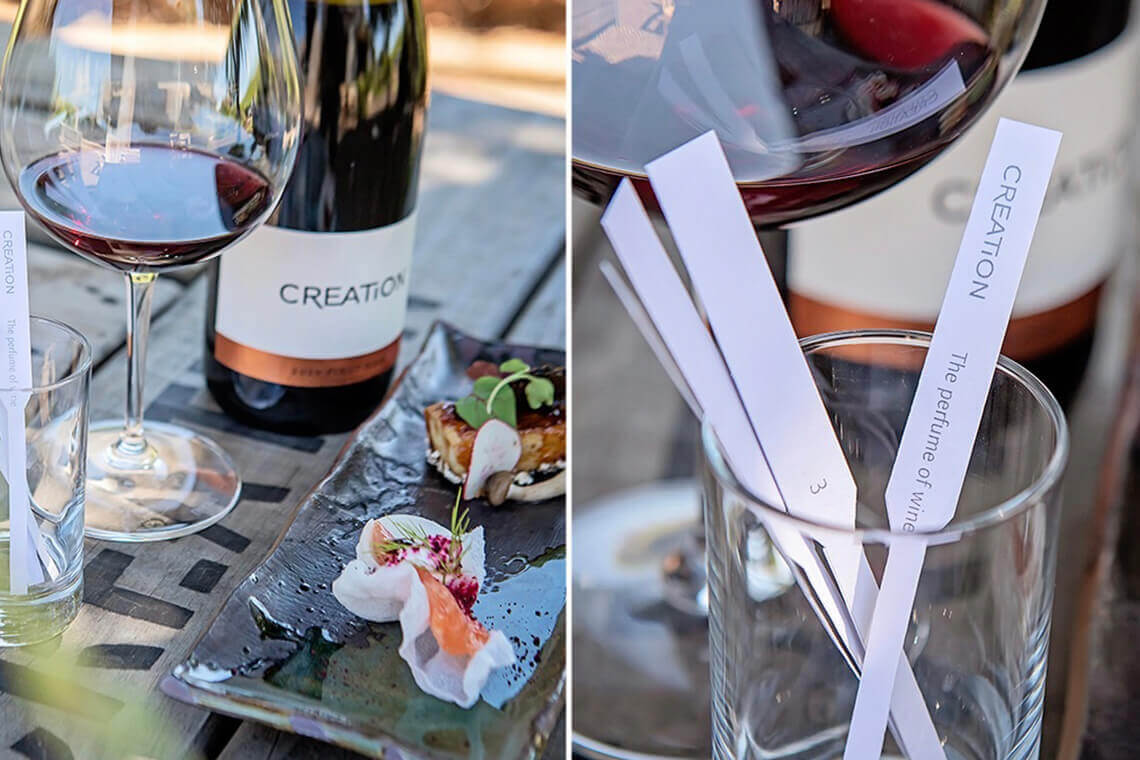 Pinot Noir around the world

Likewise, the Willamette Valley of Oregon is also recognised as a premier region for Pinot Noir along with other American locations across California. The biggest sale at the sixth annual Wilamette Pinot Noir auction on August 5 saw five cases of Adelsheim Pinot Noir “Cheers to 50 Years” sell for $17,500.

Growing in tandem with the plantings of the grape has been the familiarity and popularity of the variety with consumers. One great and entertaining leap for the grape in modern times came in the early 2000s thanks to what has become known as the Sideways effect.

It is said Pinot Noir production in California alone increased some 170% (and depressing the market for Merlot) after the release of the film Sideways. The film went on to win an Academy Award.

“It’s not a survivor like cabernet, which can just grow anywhere and thrive, even when it’s neglected,” opines the wine-obsessed protagonist Miles Raymond, played by Paul Giamatti. “No, Pinot needs constant care and attention. You know? And in fact, it can only grow in these really specific, little, tucked-away corners of the world. And – and only the most patient and nurturing of growers can do it, really. Only somebody who really takes the time to understand pinot’s potential can then coax it into its fullest expression. Then, I mean, oh, its flavors, they’re just the most haunting and brilliant and thrilling and subtle and ancient on the planet.” 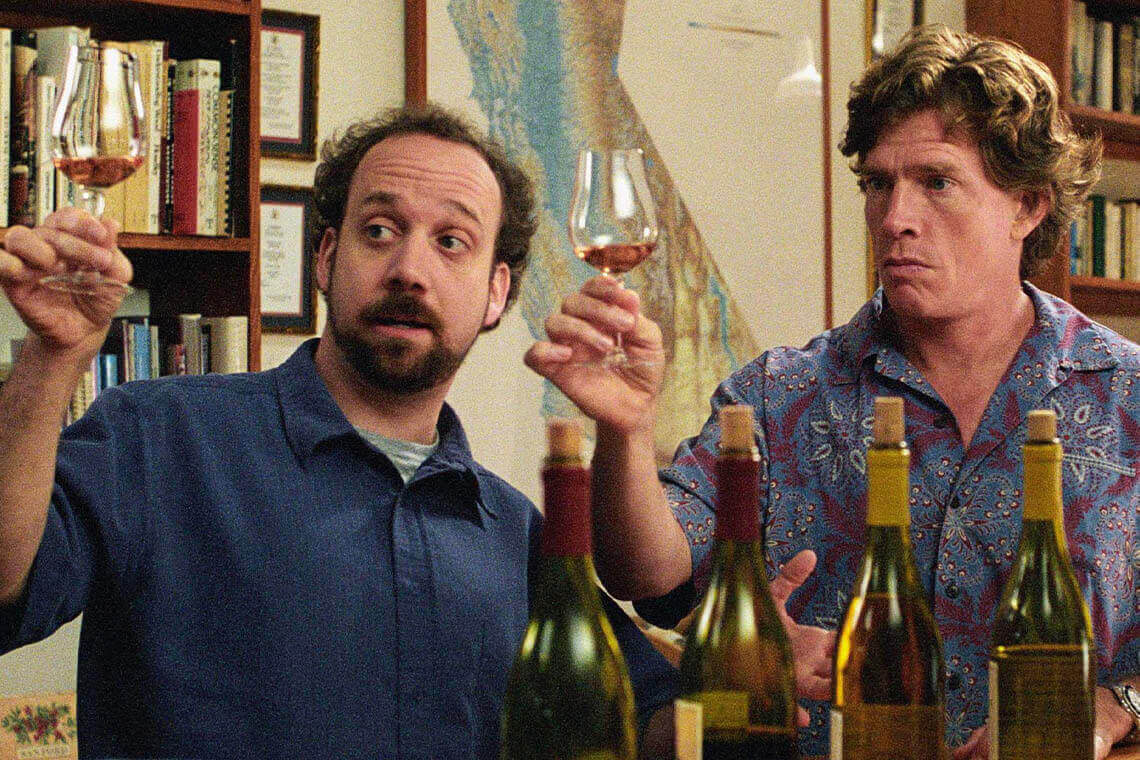 The Sideways Effect had a profound effect on Pinot Noir sales

Evidently, the script captured the attention and the range of expressions that the grape is capable of – from light and fruity to broodier versions – was ready to engage.

Georgia East from East Afternoon is a cook, writer and photographer and shares her recipe for seafood pie, the perfect accompaniment for the South African Vriesenhof Pinot Noir. 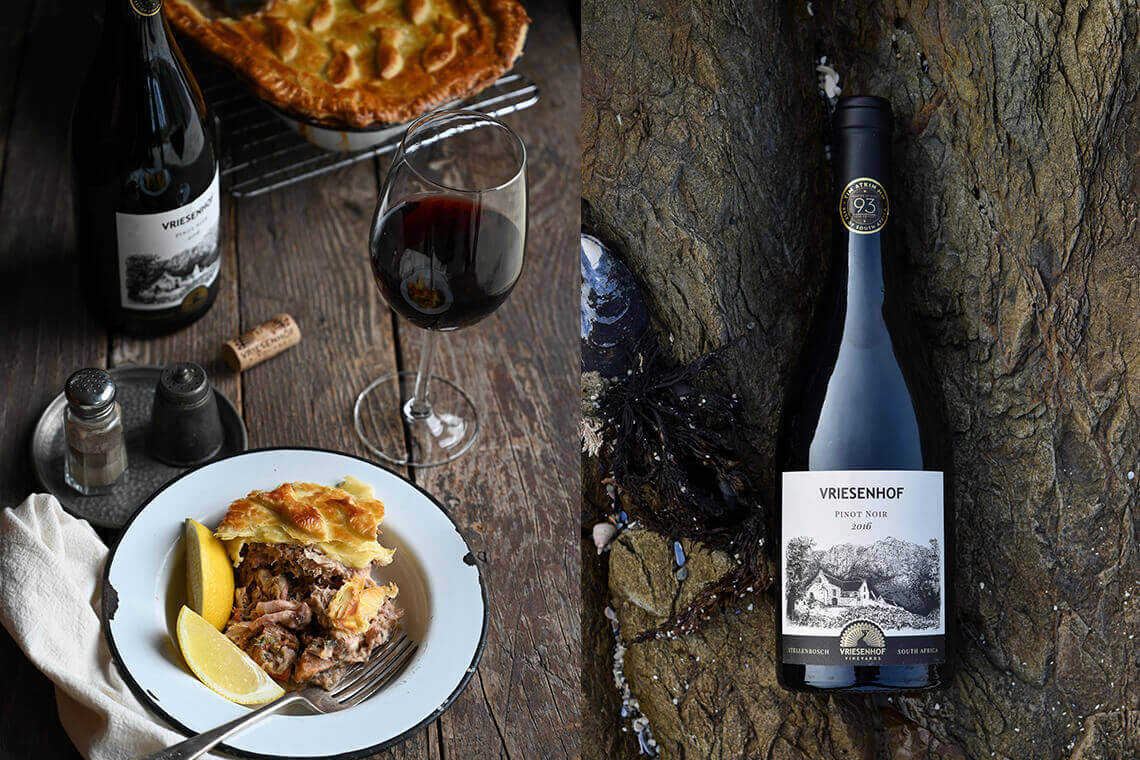 A comforting way to enjoy fish in winter, a seafood pie with silvers and squid makes for an impressive dinner option. Although mashed potato is considered the more traditional topping, I find that the rich flakiness of puff pastry holds up better to the Pinot Noir, making for a decadent dish. Lemony steamed greens like petit pois, broccolini, baby Brussels sprouts or even charred fennel are all ideal accompaniments to the pie. 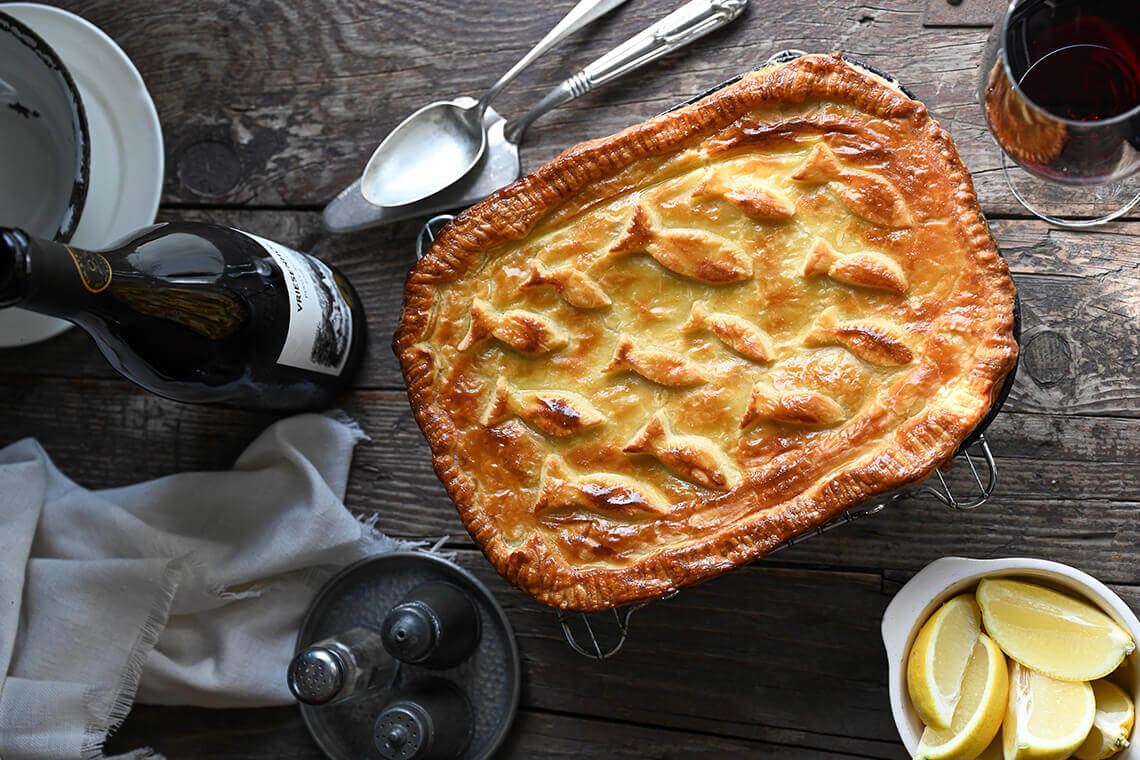 Method
Heat the olive oil and butter in a large saucepan over medium heat and fry the onion and leeks until soft and translucent. Stir through the crushed garlic and plain flour to create a thickened paste. Cook for a minute then pour in the fish stock, whisking the mixture until smooth. Slowly add in the cream and lemon juice, stirring to combine. The sauce needs to evenly coat the back of a spoon. When thickened to the right consistency, remove the sauce from the heat.
Stir through the white fish, sliced squid, mussel meat and haddock then add in the dill, discarding the stalks. Season the mixture to taste and transfer into a large ovenproof dish.
Roll out the puff pastry on a lightly floured surface to fit the pie dish. Gently cover the pie mixture with the pastry, pressing the edges down to seal in the filling. Use a pie bird or alternatively poke a few holes in the pastry to let steam escape. Brush the pastry all over with beaten egg and bake the pie in a preheated 220°C oven until golden and flaky.
Serve the pie with a side of your choice and extra lemon.

Follow Sip & Read to learn more about the wonderful world of wine. Cheers!

All roads in Graaff-Reinet lead to the historic Drostdy Hotel dating back to the early 1800s - not only because it is in...

Lanzerac Wine Estate in the scenic Jonkershoek Valley is one of the oldest and most iconic wine farms in the Stellenbosc...