Great art and wine combine in the tale of the Vinoneers

“We all have a story to tell,” says the narrator, launching into her tale. “But what makes each one different is not how this story ends, but rather, the place where it begins.” The line is from Kenneth Branagh’s latest film, Belfast, but fits just as well with the Vinoneers. 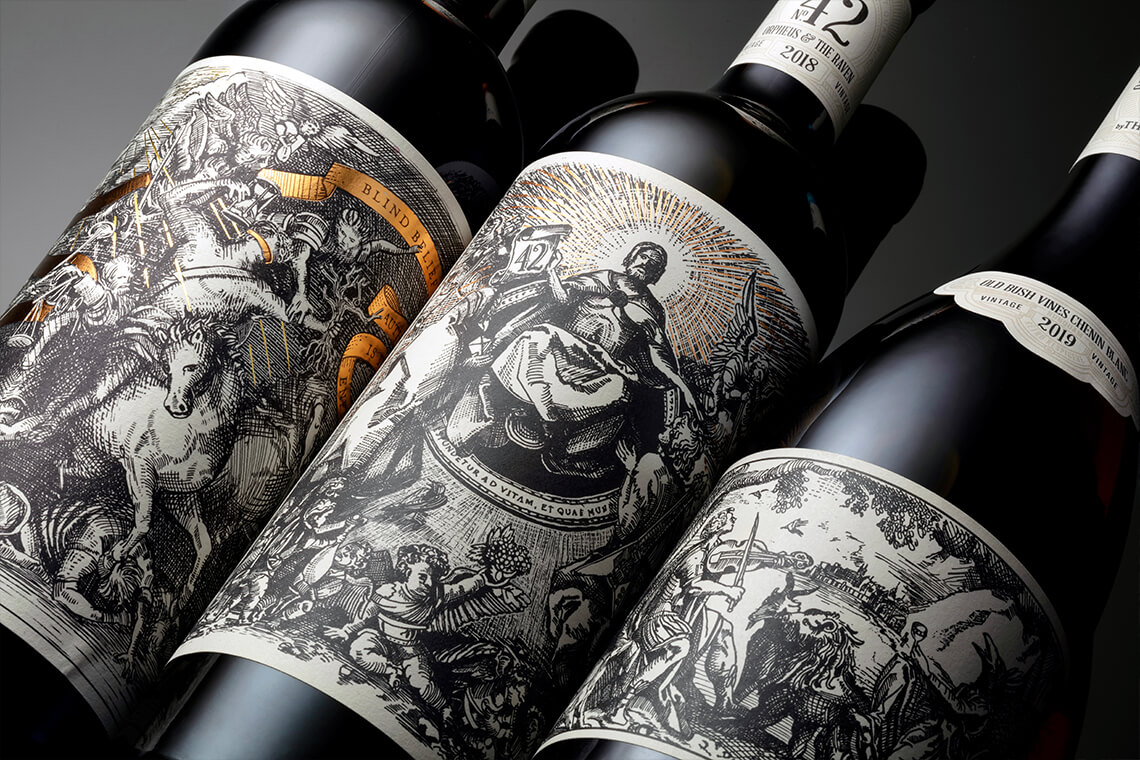 The story of Orpheus & the Raven

This South African company may be more well-known for its Orpheus & The Raven wine brand, which was established in 2010 and has thrived to much acclaim. Unconventionally though, the beginning of the operation lay not with an interest in the bottomline. Friends Etienne Louw and Brenden Schwartz already had their own successful enterprises – the former, as a chemical engineer-turned-winemaker; the latter, a graphic designer. Still, they shared a common interest.

And that interest became a dream that turned to reality. Fuelled by curiosity, Louw and Schwartz acquired a single vat of wine and took the next step: they came up with a swashbuckling name. The Vinoneers were born. Then, a bold Latin slogan was added: Simul Nos Sunt Fortis – together we are strong!

They would have to be, considering that the discerning wine world would not accept just another also-ran. 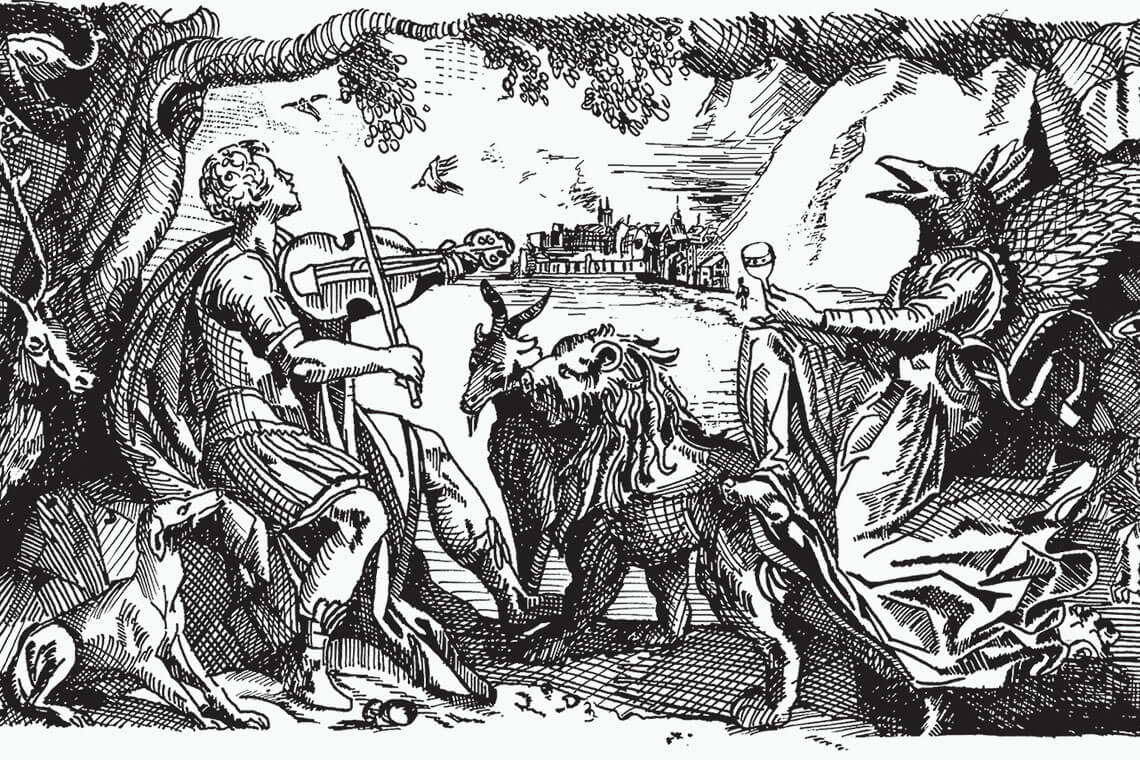 The very first label, inspired by the story of Orpheus in the underworld

It’s in the label

The wine had to live up to all these above-mentioned aspirations. But first the label, of course! What else from two self-described “creatives”?

“Rather than purely using the label to convey information about the wine, [we] use the labels to tell the story of [our] personal journeys inspired by the Greek play Orpheus in the Underworld,” they declare.

“At its core, the play encourages the audience to never look back.” 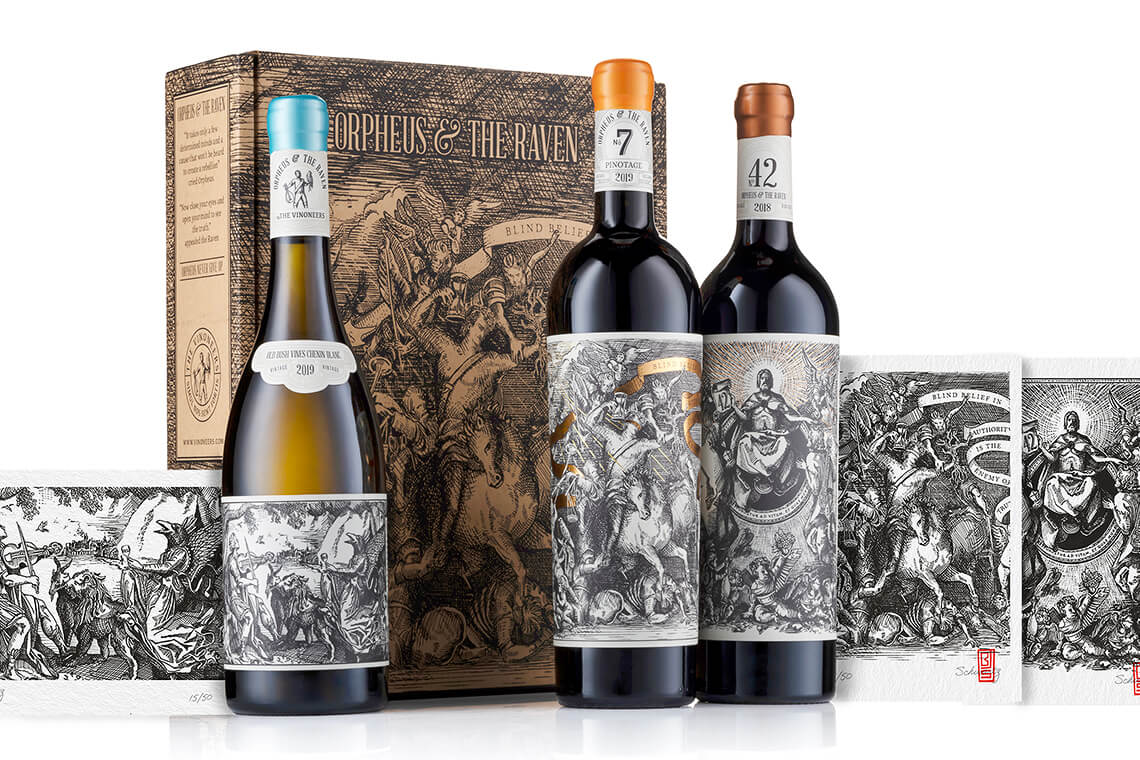 Orpheus & The raven developed as alter-egos for the Vinoneers, says Schwartz. Louw, also a classically trained musician, is represented by Orpheus with his lyre; Schwartz, the raven – a smart and creative bird contained in his family crest. In the story, the raven incites Orpheus to forge ahead.

Each label is unique, recalling true experiences in the lives of the Vinoneers. And each is a hand-drawn, baroque style illustration based on the 16th century German artist Albrecht Dürer, with Orpheus & The Raven making an appearance in each.

From this award-winning exterior, the link with the art of the contents was simple and Orpheus & The Raven was born. Today, the brand comprises four wines. 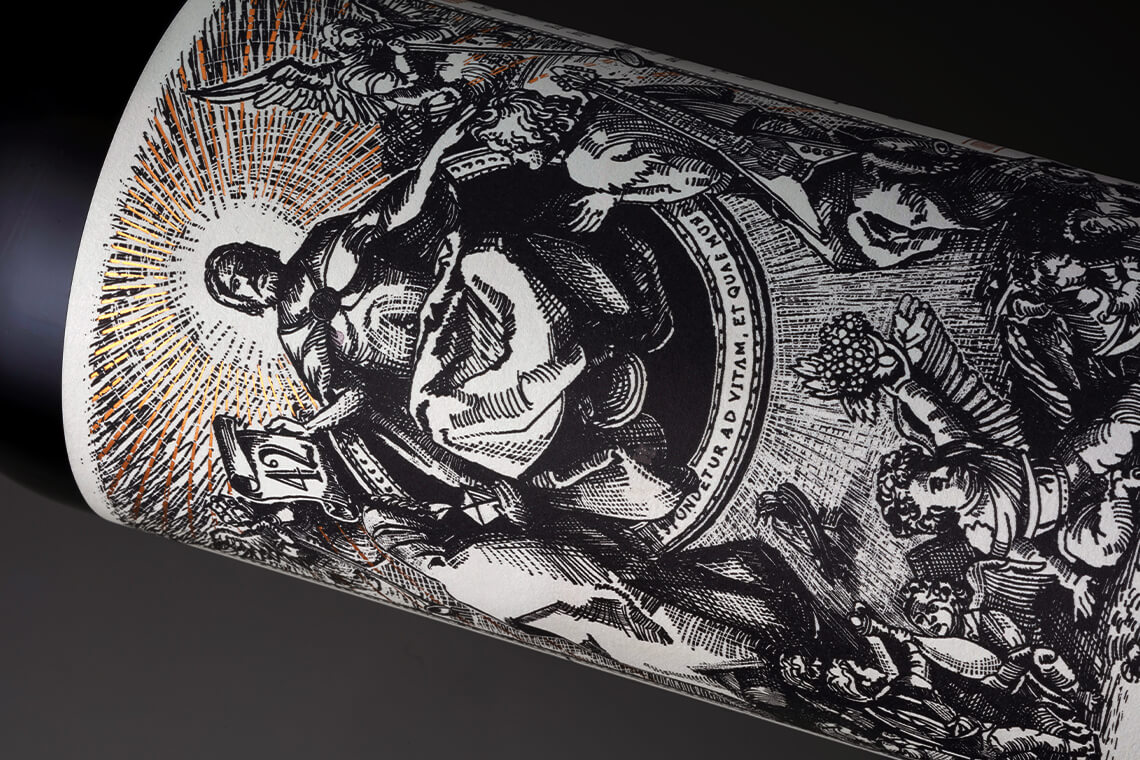 The more time you spend exploring each label, the more the story unravels

Orpheus & the Raven No.42 is a red blend dominated by Pinotage, a South African-developed variety celebrated through this wine. Other components have included Pinot noir and Cinsault. For its making, quality fruit is sourced from a variety of premier regions of the Cape, vinified and matured in oak barrels.

“While Pinotage was primarily responsible for structure and vibrant oak notes, Pinot noir and Cinsault contributed elegance and Old-World sensibility,” says Louw of the 2018 vintage.

Its name was inspired by the late Douglas Adams who enigmatically wrote, as all fans of his classic book The Hitchhiker’s Guide to the Galaxy know: “The answer to the ultimate question of Life, the universe and everything is 42.”

Buy Red Blends from top producers like the Vinoneers here. 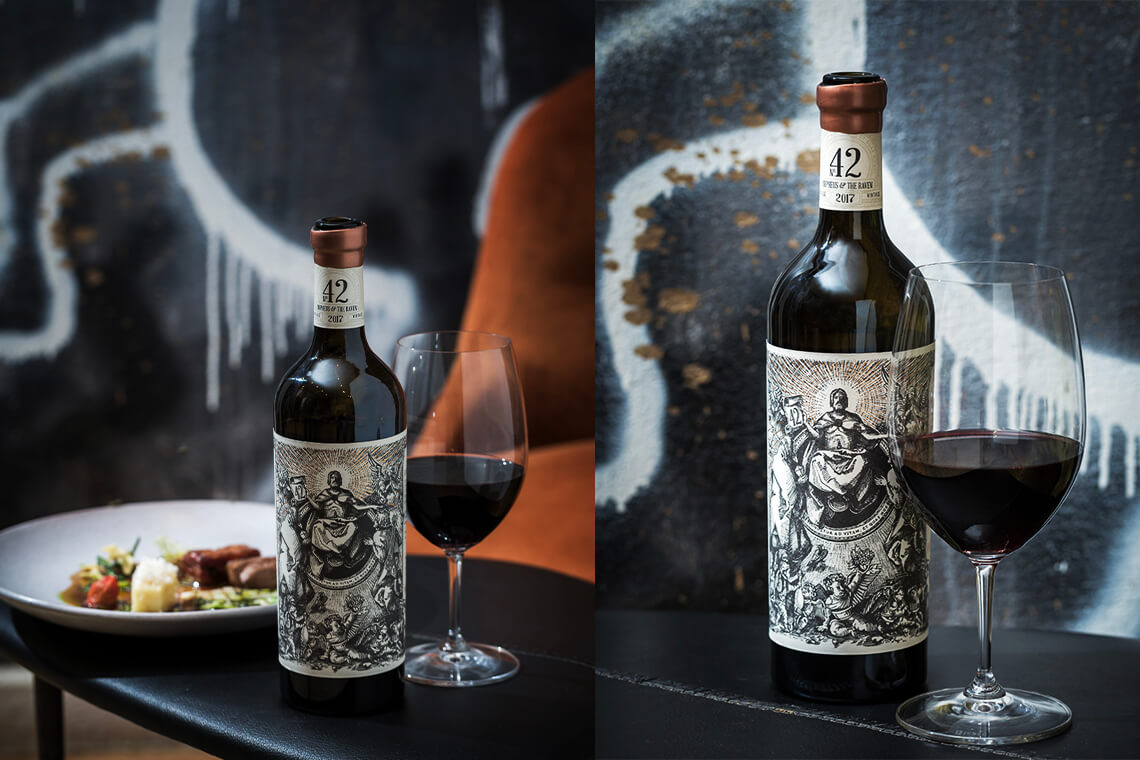 The mesmerizing details captured on the no 42 blend

The Orpheus & the Raven Chenin Blanc 2019 was made from vines planted in 1973, near Cape Town.

The wine underwent spontaneous malolactic fermentation in barrel, after which it was left on the lees without sulphur addition for six months. The wine was matured for a total of 17 months in French oak. The limited fruit meant that just 1 890 bottles of this wine were produced.

Buy Chenin Blanc from top producers like the Vinoneers here. 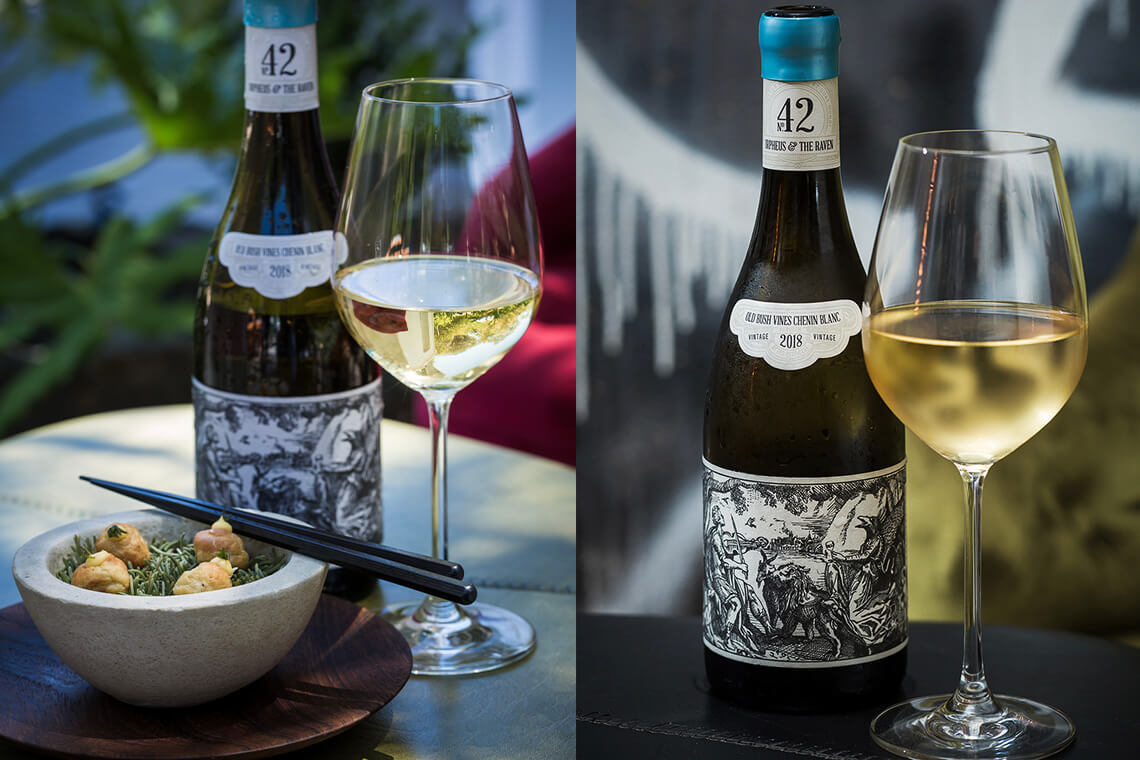 A masterpiece of art & wine, the old vine Chenin Blanc

The Orpheus & the Raven Gewürztraminer was conceived as part of a Swansong range, first launched in 2016. It became a poignant wine for what was to come. Schwartz tells the story: “In 2020, the vintage dominated by a global pandemic, Raven’s wise words to Orpheus rang truer than ever: ‘Don’t wait for tomorrow, Orpheus! The Art of Life is in the moment. Tomorrow’s song may never be heard…’

For the 2019 vintage, grapes were sourced from slopes on the outskirts of Stellenbosch. The result, according to Louw, is “an elegant, complex wine with good ageing potential”.

The Orpheus & the Raven Pinotage is another tribute to the South African variety, developed in the 1920s and grown around the world today. The variety is a cross of Pinot noir and Cinsault; the wine, a tribute to the winemakers who persevered to see the wine become an international favourite.

The 2019 vintage is a site-specific wine from the Stellenbosch ward of Simonsberg. A combination of first, second and third-fill barrels were used, comprising 50% new oak. The wine was matured for 18 months, prior to blending and bottling in January 2021.

Buy Pinotage from top producers like the Vinoneers here and learn more about this diverse grape variety here. 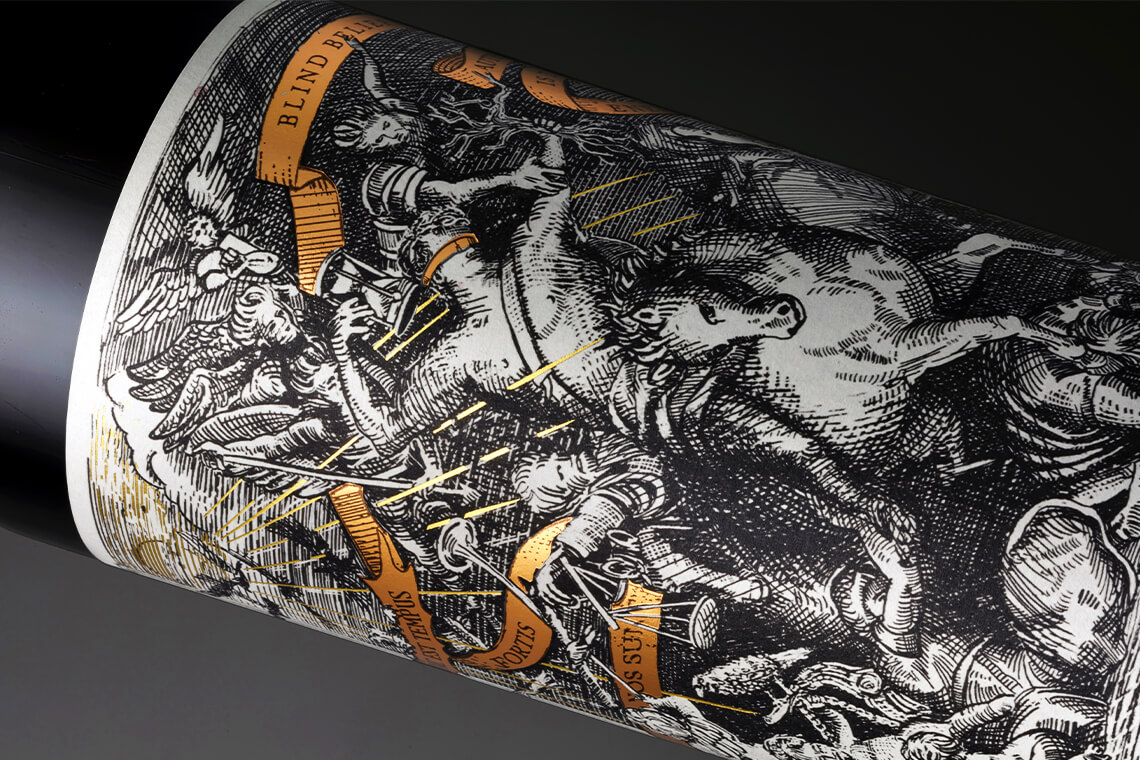 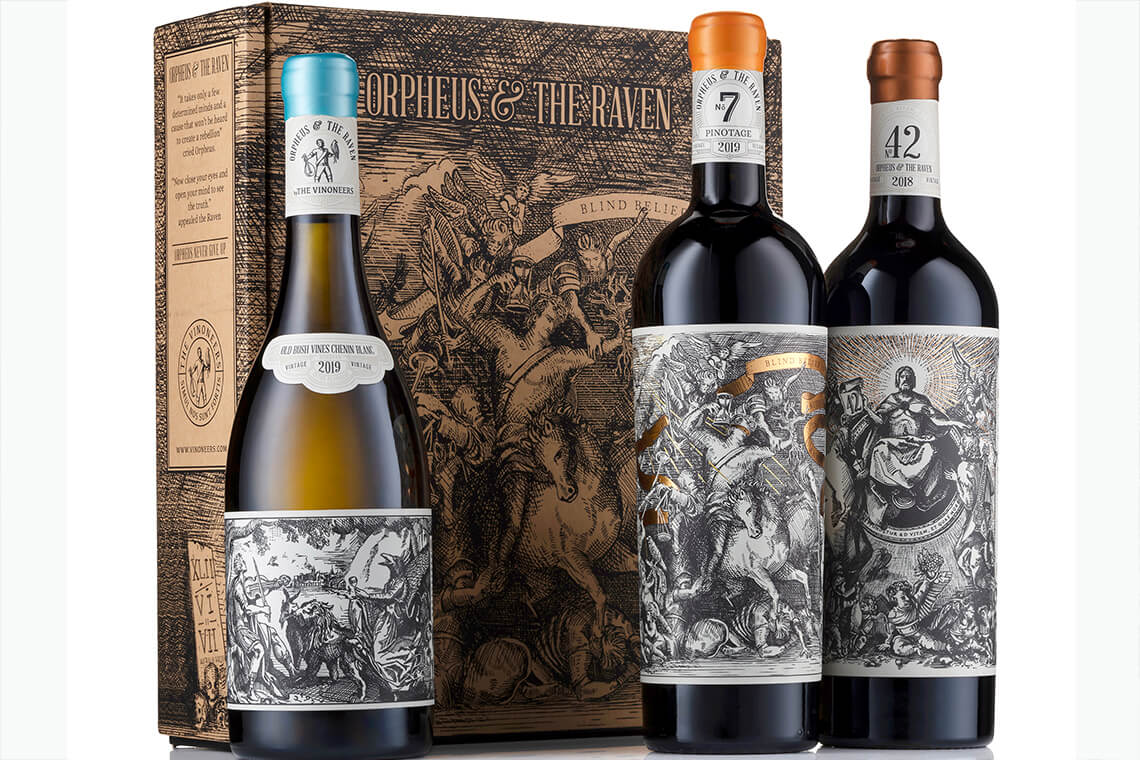